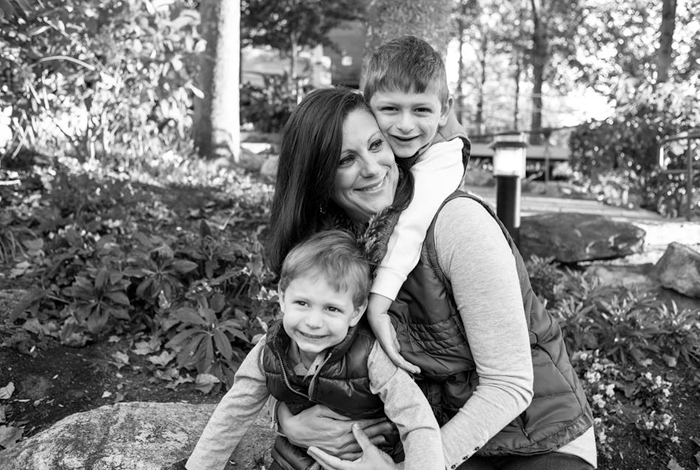 “As a stay at home mom, I’ve looked for volunteer opportunities with organizations of which I could be passionate. I left the corporate world to be full time with my kids, but I always felt like there was more and if I was going to take away time from my boys, then it had to be something really worthwhile. Kay Roper [CSP Executive Director] spoke about the Park on the 9th anniversary of the death of my younger brother to leukemia. I took it as a sign from God that this is where I was needed.

“My younger brother had been under the weather for quite some time. He’d been to doctors for nearly a month as they tried to determine what was wrong with him. A few years earlier, he’d been hit by a drunk driver, & subsequently his spleen had to be removed. We were told that because the spleen was gone, determining that his illness was leukemia was a bit difficult.

“My two most specific memories both come from when Brian was first diagnosed & then when it came out of remission. First let me preface this by saying, my brother was younger by 6 years. I was always very protective of him; he was like my own little baby. When he was diagnosed, he had just turned 23 years old. He was admitted into the hospital on Thursday, & on Friday, my parents wanted to go see all of our family face-to-face & to tell them about Brian; so I stayed at the hospital with him. That afternoon, he leaned forward on the bed; his IVs dangling from a port; the IV tree obnoxiously taunting him; & said, ‘I don’t want to die.’ I did the big sister approach, & pushing back my own tears told him he wasn’t going to die — that people beat this all the time, & he would too.

“Flash forward 2 1/2 years to Jan. 3, ’07 — when we had been told that the leukemia was back, & he had 3-6 months to live. My parents had left the room, so it was just the two of us. I started crying & asked Brian what I was supposed to do without him, & that I didn’t want him to die. He put his arms around me — instantly becoming the older sibling — & said, ‘You’re going to keep living, & you’ll do it for me.’ I think these two memories stand out because they show how much he had grown spiritually in his years fighting leukemia. He ended up dying 29 days later — not even making it a month after the leukemia came out of remission.

“Cancer isn’t just about the radiation & chemo treatments. There’s so much more to it. We all became more educated; we found out there were burdens in life we could easily shoulder. We all experienced a lot of change, a lot of heartbreak, & a lot of laughs during the 2 ½ years Brian bravely fought this disease. I try not to have regrets in life or spend my days thinking, ‘What if?’ We fought this battle together as a family, because I believe it’s what God felt we needed. My parents & I came out of it broken but able to piece our lives back together. Almost 10 years later, I still have my days of just sitting in my room and crying my eyes out. There’s a piece of my heart that’s gone, & I still have my days of asking God, ‘Why?’ But in the end, I’m grateful not necessarily for the experience of cancer in my brother’s life, but for the way I came out of it & what I learned from it. I’d spent my entire life looking into the future & not living in the moment. I stopped & breathed more often, took in the wonders of God, & even found out new things about my brother.

“I would like to think that watching how well my brother handled all of his treatments — & suffer with grace & dignity — has encouraged me to be strong in life, to never give up, to always fight. My mother taught me how to be strong for her child. You know, in the 2 ½ years Brian went through this, he NEVER saw her cry. She saved that for me, my dad or her friends. As a mother, I’m still in awe of her strength as to how well she kept everything together for my brother’s sake.

“I never really considered myself a survivor until I met Kay. For me, a survivor was always someone who was diagnosed with cancer & then beat it — not the people surrounding that person. Then I recall my brother’s words to me that day when we were told his leukemia was back: ‘You’re going to keep living, & you’ll do it for me.’ When I have my days that are bad, I think about how worse his days were at times, & how well he handled those days. Everything that I do in my life, no matter how minute it may seem, I always think, ‘How would Brian handle this? Would he be proud of me?’”