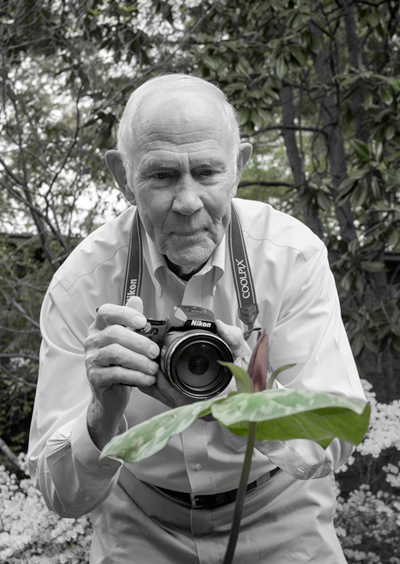 “Kay Roper called me one day to photograph the banks over there [at the park’s site], because I do have a camera, & I do enjoy photography. That’s how I got involved [with CSP]. As Kay knows, my sister was a victim of cancer.

“I’m so addicted to wildflowers, that when they bloom, I’ll drive anywhere in the country just to see one. I have 1,000 pictures of the same flower. I’ll leave here in the morning & drive to the Blue Ridge Parkway just to look at the vistas; & why that’s restoring to me — & it is to a lot of people – I’m not sure. It’s just natural beauty. I get an emotional high. I don’t do well in the city.

“My sister went to New York with a lady named Betty Hipp. They lived there, & both met their husbands there…the last three or four years of her life, she came back to Greenville.

“We were fortunate to have a close family on both sides. My grandfather, who was the president of Furman, & my grandmother lived over on Broadus Avenue…we lived with them. My grandmother on the Keys side had fried chicken dinner for everybody that lived in Greenville every Friday night.

“We always had family events, & so when [my sister] came here, & especially when she was ill, we reconnected & got to know each other pretty well. She would always remind me of things I shouldn’t have done as a young boy, like pull her hair & do little funny things. She was two years older than I was. But we did catch up, & my wife of 50 years & my sister were good friends. We would go out to dinner & converse about how it used to be.

“I’m a very positive person…I’ve had the good life. But I feel like there are a lot of people – & I hate to be negative – but there’s too much talking about the shortcomings of family members rather than the beauty of the heritage that they have. These days, nobody has Friday night fried chicken dinners. I’ve had the good life.”