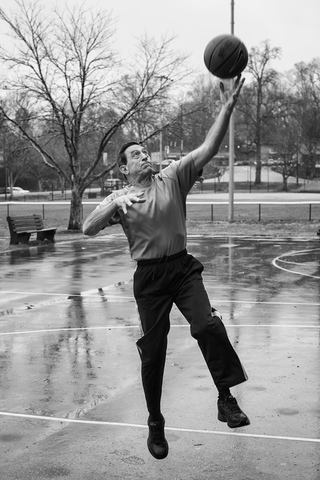 “I was diagnosed in early May of 2013 with prostate cancer. It was very well advanced, despite the fact that I had physicals & PSA tests every year. I had robotic prostatectomy surgery in June – June 6th as of a matter of fact – D Day. I was supposed to retire at the end of June from Michelin North America & go on a retirement cruise with my beautiful wife, Sandy, though the cancer put a little damper on retirement plans. (She & our family have been very supportive during this journey.) Despite the staging of [the cancer], I was rather lucky I didn’t have to have any other treatment whatsoever; which surprised some of the doctors, frankly, because it was so advanced. But the surgery was so successful that I was able to get away without any additional treatment.

“There’s a benchmark when they do those PSA tests, which are blood tests: if the number is around 4 or greater, [the doctors] start to raise the flag a little bit. As you get older, that number can be a little bit higher & not be a problem. But once it gets between 4 & 10, there’s a 25% chance statistically that it could be prostate cancer. Mine had played around in the 4 – 5 range for 1 ½ – 2 years; there were no other symptoms. Having said that, the doctors were not convinced enough to say I needed to have a biopsy done. Hindsight being 20/20, had I known what I know today about it – I’ve done a lot of studying on it – I would’ve made sure it was done earlier. At the end of the day, did it make much difference? Fortunately it has not appeared to, because my recovery has been great; but it could’ve. Had I not had an annual physical that April, & [the tests] showed [the PSA number] had bounced up again, then in all probability [the cancer] would have spread to other parts of my body, & I would not be a happy camper right now. So it’s testimony to the need to have testing done – & the blood test is a very simple, painless thing.

“Surgery was very, very easy, because it was simple. I had no problems. I went back for my first checkup in 3 months, & [the cancer] was gone. I recovered very, very well. I retired a month later, at the end of July. We started to travel & do a lot of things in the area. I am very active in volunteering. I spend maybe 15 – 20 hours a week with an organization called SCORE. It’s basically a partner of the Small Business Administration, & we do a lot of outreach to people trying to start their own business, & mentoring and so forth. I run education for the Upstate chapter – I run about 75 workshops a year. In a given year, we will probably touch over a 1000 people with our workshops. I’m also on the executive team with the Us TOO prostate cancer support organization, & beginning this month, I am now part of the American Cancer Society of Greenville County Executive Leadership Council. Besides that, I do Meals on Wheels every other week – so I have kept very active in volunteering & in the community. To cite the words of my wife, she doesn’t think I ever really retired! I got involved with all of this after retirement. We also do a lot of traveling. We travel to different places 6-7 times a year. We stay busy! It’s enjoyable.”