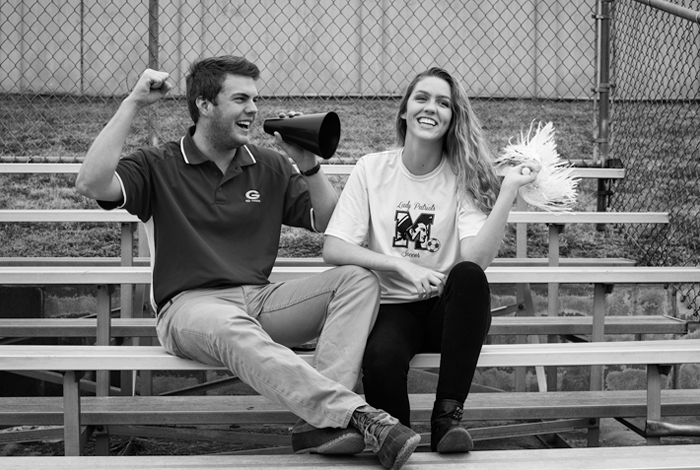 CHARLES: “Caroline & I were friends in high school, & I think we both had our minds set on becoming our student body presidents. That actually ended up happening! We both won our elections, so that was pretty cool. Our schools [Greenville High & J.L. Mann] independently started brainstorming charity options for Spirit Week [the 2013-14 school year]. The schools had always chosen different charities, but we thought it would pretty cool to choose the same charity: one that truly gives back to our community [like CSP]. We thought it would be neat to do a Spirit Week together to show the unity that cancer brings to the community — because everyone has been affected by it. So the idea snowballed from there.”

CAROLINE: “At first when presented to my student council, it was sort of like, ‘What…?’ It’s never been done, so at first it was a lot to take in, because it’s such a rivalry between the schools. So it was a big deal — like, ‘Wait what? We are going to work with them on a lot of things & still make it a rivalry?’ But we simmered on it, & it started to become really exciting for everyone on my council, I know. It became more like, ‘Oh my gosh! Let’s go! Let’s meet with them, talk with them, figure out what we want to do.’ [Both schools] were able to do a couple of events together. It was cool to brainstorm about things we could only do when coming together at a time like that. J.L Mann ended up raising $214,203.93 for CSP.”

CHARLES: “Yeah! Additionally, my school raised $298,266.47 that week. It’s definitely an important cause. Cancer hits home pretty hard for me personally. We lost my maternal grandmother before I was born – my mom was 27, & it was right before her wedding — & my maternal grandfather my sophomore year of high school to rectal melanoma, which is really rare. That was very tough. I was very close to him. My aunt – my dad’s sister — is also battling cancer. She’s been in & out of remission for 8 or 10 years. She was diagnosed with breast cancer, but most recently has battled colon cancer with a few spots found on her lungs as well. Even my close friends – I am affected by when they are affected. Cancer’s impact is far reaching. It’s truly like a web.”

CAROLINE: “Cancer was not something I had dealt with in my immediate family, but growing up my mom’s best friend battled it. She’s beaten breast cancer twice, & just growing up with her daughter being one of my best friends as well, [my family] was always doing stuff like taking food to the hospital for them, being the support system behind helping another family deal with that. My roommate’s mom has beaten breast cancer since we’ve been in college. Also since I got to college I joined Tri Delta, & our philanthropy is St. Jude Children’s Research Hospital. So for me, CSP led to this soft spot in my heart for working with people who have or have had cancer; working with others on certain cancer initiatives; doing things like meeting pediatric cancer patients with St. Jude, & seeing & being able to work with families that have been affected. So I have been more affected by cancer now than ever before. I was just at St. Jude’s in Memphis this weekend, volunteering & doing a private tour, getting to see where the money we have been raising has been going, & meeting with some of the patients there.”

CHARLES: “As far as the Park, I definitely think it was a new concept for me: just thinking about continuing a legacy, & the people left to do that being survivors as well. It had drawn me to fundraising for CSP since I have been personally impacted. I think it’s such an incredible way to go about thinking about cancer — either way, if you defeat it or you don’t win, the people who you love will go on to be your survivors. It’s a really nice sentiment to have a park that represents that, & embodies this mindset you would want anyone battling cancer to have, because it’s an awful thing. It’s nice to have an environment & a place to go that embodies this idea that, ‘You are fighting, you are doing your best, you are not alone, & there are people here to support you.’ There are so many people that go through the ordeal, & it’s nice to have the Park as a physical place — but also conceptually this mindset that survivors are not just those who have fought the disease & won. It’s also about the others who are carrying on the legacy of those lost.”

CAROLINE: “Yes. Charlie has said a lot. It’s really the same thing for me. I can think of the times growing up around Jenny (my mom’s best friend) & having those times with her daughter, Kristin. Being young, not really knowing what’s really going on — but we’d see family members reaching out, ambulances coming to the house…I think about if we had had a place to go back then. Having a place like CSP where my mom could drop us off, & we could walk around, look at things, take it all in. I think about being a child, & just having a place to be able to breathe & try to understand; a tranquil place when other places could be not-so-peaceful, with a lot of adults all around you, acting as your parents while your parents were dealing with such a difficult thing. It would’ve done wonders, & to have that in Greenville now — when I tell people I meet through St. Jude about the Park, they are like, ‘Oh my gosh, we have to go! We have to visit!’ It’s relieving for people to know that there’s a place like that to go & relax, rewind, be with nature — a place to find some peace & time to let it all settle in.”