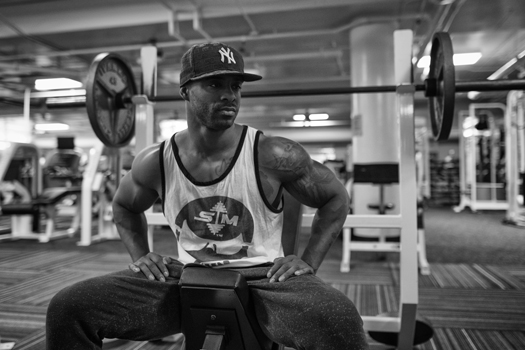 “Jessica & I dated in high school. When I came back here from Germany — where I stayed for 10 years after being deployed overseas for the war — we dated again for about a year. When we started dating, she was in full remission. The year before, they had told her she would die in 12 months. 12 months passed, & the doctors ended up basically saying, ‘Everything’s in remission. We don’t know what happened — we thought you were gone.’ So when we talked about dating again, that was a pretty big deal – to know that she was probably going to be here. To believe she had beaten it.

“She was healthy for the first 4 months, but it went downhill really fast. We had a rapport from high school, & we knew each other. We had stayed in touch over the years. It was a different dynamic than it probably would’ve been if we didn’t have all that.

“…I’m not a doctor, & I don’t understand the workings of the disease. I just always thought there was a cure. Deep down somewhere, there’s this weird little thing that makes you think you’re the cure. As silly as it sounds – that’s what I thought: ‘I’m going to be with her, & she’s with me, & she’s going to be ok.’

“I was hurt. I had dated someone for 9 years in Europe, & we split up because I was coming back here. So the person that ended up being in my life – I prayed on it. I thought, ‘I’m in her life because I am her solution,’ & when she died, I was mad. I went through a rut. It wasn’t a good time in my life. I was next-level angry. But you have to think about it outside of yourself – the world is more than just you. When I thought about what happened & the things we did, I really thought God brought me here for her & her kids. She wasn’t supposed to be here for me – I really feel like I was here for them. Life isn’t about one person – me. Life is about the world, & us, & how we can act as a family with one another. You don’t ever know what’s going to happen. Maybe it works out & maybe it doesn’t.  Sometimes when you can just help someone do something that’s outside of your entire normal realm of thought as far as how difficult it is…I mean she had to leave two kids. But she’s still blessing me to this day. I mean look at this opportunity — to talk about what I learned from the experience with others. I see it as a blessing.”