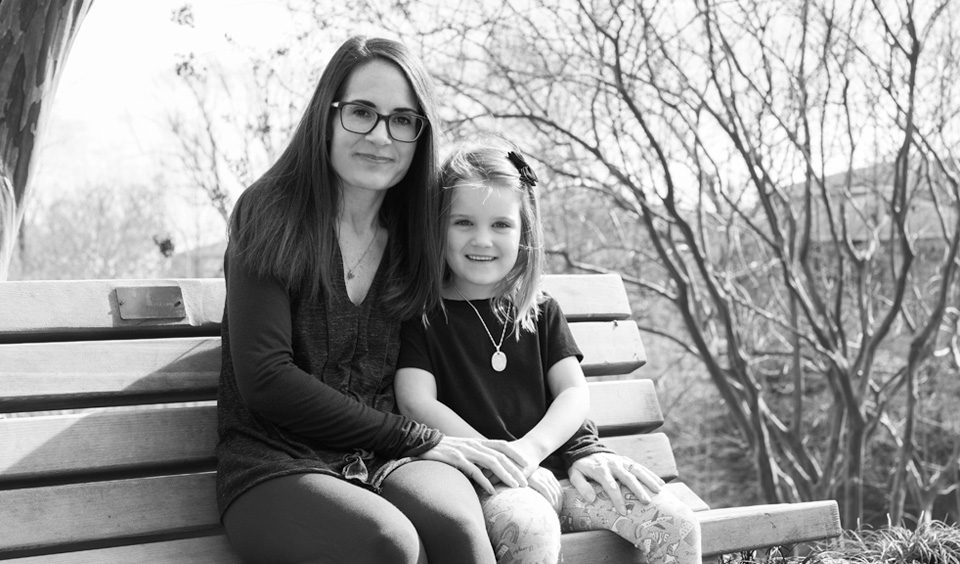 COURTNEY LEFT THIS LIFE OCTOBER 2019. HER WISH WAS TO SHARE HER STORY.

“I was diagnosed in October of 2015 with colorectal cancer. The unique part about that to me is that I’ve grown up with Crohn’s Disease which is an autoimmune disease affecting the colon. I’d lost parts of my colon to Crohn’s Disease, which is why it took a little time to diagnose. As far as the doctors were concerned I was a bit of a medical anomaly.”

“I was very ill from a young age with other things, but I think cancer is shocking for anybody. At some point pretty early in the process, the disease metastasized to my lungs which is common with colon cancer…we kinda knew then we needed to take a very aggressive approach. Where we are is at a stage of running out of options, maybe already run out of options, and we’re trying to find ways to appreciate the time I have right now. It does feel a bit more urgent as far as applying it to direct parts of my life specifically my husband and my daughter.”

“When I was diagnosed she wasn’t quite 3, she was just over 2. And I will say that for most of her 2nd year, I was very sick up until the diagnosis. I can reflect back and realize that my daughter has probably only known a sick mommy and sometimes that weighs heavy and sometimes there’s the thought that she will be the most empathetic, compassionate adult that she can be having experienced this at such a young age.”

“We never called it just “sick”. We explained it was cancer, we explained where it was. At the end of the day this is my reality, it is my life that I am living.”

“I don’t have a bucket list, nor do I have a lot of weight on sweating the little things that actually did turn out to be little things now that the big picture is. I can definitely say I am at peace with where I am and how it will go. I will never be at peace worrying about them.”

“I emailed Kay regarding the park and its purpose because I just envision an opportunity for anyone who would want to come together and want to celebrate Nola and share with Nola and Brad what they knew about me. I wanted to see if it was possible to have some sort of celebration of life. I wanted to see if that was an intended purpose of the park because we’ve enjoyed seeing it be constructed. I have a plaque on the bridge with my name on it. Nola goes and finds it and thinks she’s a celebrity. We’ve enjoyed that part of it.”

“It’s ok for life to be hard. We all just need to react in a way that works for us. Sometimes I was really hard on myself like ‘if I had been positive would that cancer have gotten better?’ A lot of people keep looking for the grass to be greener. A lot of people keep looking for as my husband says, the stations of the journey, but it’s really about the journey. The journey is what matters.”

“I met my life dream when I became a wife and a mother. However my story ends no one will ever be able to say she gave up. I’ve fought to the very last second. It’s been a long fight and I wouldn’t want anyone around me to think I just gave in. I just hope to leave little nuggets of me somewhere. I think everybody’s story is worth hearing because they’re so different. There’s probably uniqueness and probably similarities to everybody. I don’t regret any of it, every bit of it was exactly as it should have been as far as timing.”