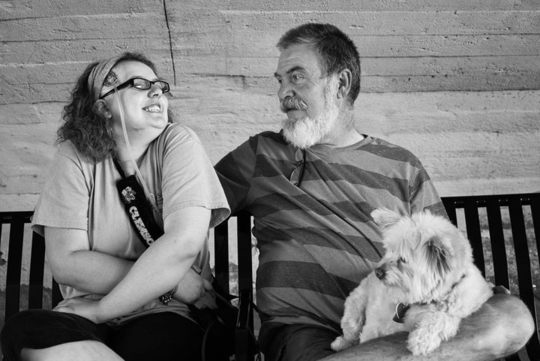 Our Survivor Series photographer Mark Kirby was so inspired by this week’s featured survivor duo, he wrote a little something himself to introduce them to you all. Stay tuned for another post, with their story in their own words; but for now, meet Julia & Ernie, as told by the man behind the lens.
____________

This is the story of “We.” Throughout the Survivor Series, we’ve met amazing, strong & inspiring survivors. We’ve heard stories about family, spouses & friends who helped survivors get through their battles. Julia Dandeneau & her grandfather, Ernie Dandeneau, are the epitome of that teamwork. This is their story of “We.”

Anyone who has spent more than a few minutes in Starbucks on Main Street has seen Ernie & Julia sitting at the bar, both studying. I had no idea this seemingly typical high school student was one of the strongest & most amazing people I’ve ever met until we spent a morning together. Julia – just 16 years old – has endured three brain surgeries, 27 MRIs, over 30 radiation treatments, & at least 40 sessions of chemotherapy. But, she’s too busy doing her homework to talk much about it. You see, through all the treatments & time in & out of hospitals, being treated by 19 different doctors, she has not fallen behind her classmates. As Ernie explained their journey to me, Julia was busy with American History, occasionally correcting a fact or adding an aside, multi-tasking with the best of them.

But this is the story of “We.” Julia’s tumor was discovered when she was in 3rd grade, but things got worse two years later. That’s when Ernie retired from his career as a COO/CEO to be Julia’s “Treatment Chief Of Operations” which he has being doing everyday since. While they now have Julia’s treatment history computerized, Ernie still proudly carries the notebook that contains Julia’s band-aid collection, the precise settings of every radiation dose Julia ever received, & anything else that can possibly support Julia’s fight. Their first Make-A-Wish Foundation grant enabled them to go “electronic,” which ensured Julia could continue her studies while going through chemo. The seats near the Apple Store above Starbucks became their base of operations, so Julia could use the store’s faster Wi-Fi to finish her studies before heading to the hospital for treatment. Ernie, who managed hundreds of subordinates during his professional career, now manages hundreds of complications & challenges with the same skill & attention to detail.

As I sat & listened to the incredible journey they’ve been on together, it is always “We.” Ernie has fought the battle at Julia’s side, every step of the way; & then there’s “Dr. Pumpkin,” Julia’s therapy dog who is at her side every moment. Pumpkin was critical during some of Julia’s toughest treatments; & opened doors to many nurses, technicians & specialists who always wanted to visit with her.

I liken Julia to a prizefighter & Ernie, her manager. Julia has bounced back from every jab & upper-cut, while Ernie has been right there in the corner, feeling every punch, & still coaching & training every second of the way; & one thing this corner man will never do is throw in the towel. Julia has beaten the cancer. Their fight now is with the aftereffects of the disease & treatment. But, they are winning. They WILL win.