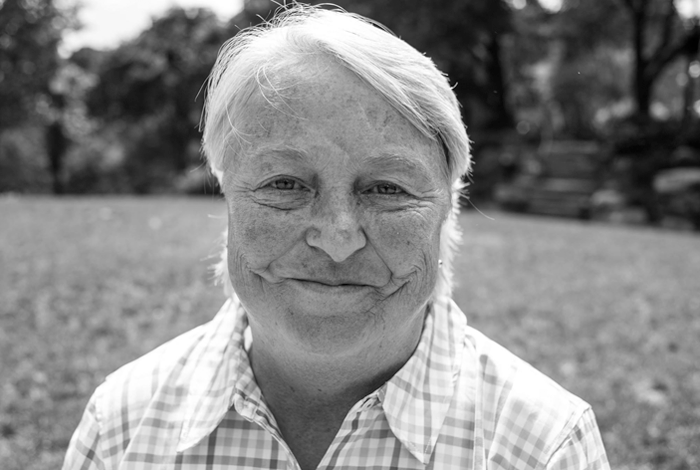 “I tell women (& men) every day that cancer is not a death sentence.

“I was diagnosed with Stage 3.5 breast cancer in September of 2008. I felt a lump in my breast in April of that year, but did not go to the doctor until September. In fact, up until that point I had not had a mammogram in 10 years. The doctor felt the lump, & said in the office that he thought it was cancer, so he immediately sent me to get an ultrasound — & yes, it was cancer.

“One specific memory I have of dealing with cancer was when I was sitting in the waiting room after the doctor told me I had it — I was in shock as I waited for the nurse to schedule the ultrasound. I was really trying to stay strong.

“Another vivid memory I have was when I told the oncologist I didn’t want to have chemo. I had watched a dear friend die from breast cancer, & I saw how horribly the chemo had affected her. I was petrified. My family eventually talked me into it, & I had chemo, radiation, & a double mastectomy.

“I will never sugarcoat my experience. There were dark, dark days. Chemo is horrible, but you see that small light at the end of the tunnel. Every day was a rollercoaster – both bad days & good days.

“I have always appreciated my friends & family. My support system was amazing. I had my family & my ‘Mann Family’ (from JL Mann High School). I had a couple cancer survivors who were a huge impact upon me as well: Catherine Ann Jeter, & Laura Ann Ellison & her husband, Dr. Travis Ellison. Catherine Ann taught me that you have to have a sense of humor. You have to laugh when you can! The Ellisons paid me short visits on Sunday evenings for weeks while I was sick. They taught me the value of simply giving time to someone who is going through an illness.

“Breast cancer made me more aware & more sensitive to the sufferings of everyday people. I learned who was important & what was important. I learned to say ‘I love you’ more than anyone!