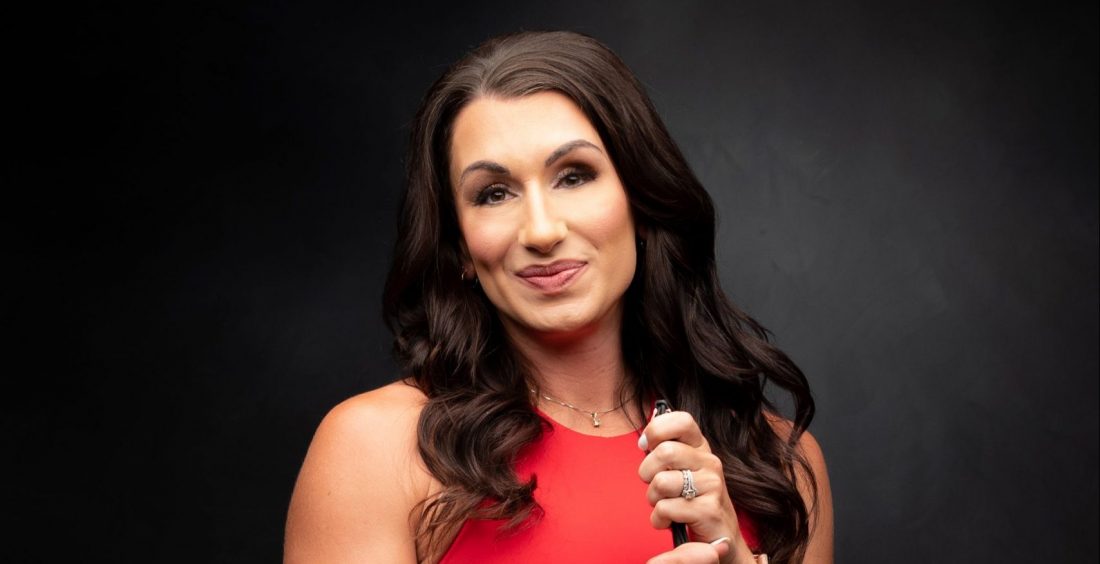 ‘A big part of my cancer story is that my pediatric cancer has led to me having this permanent disability and unfortunately disability and blindness is sometimes looked at by the world as “less than” or “people need a lot of help” or “people don’t live as independently as others” and those are some of the barriers and stereotypes I’m trying to breakdown.’

‘When I was 6 months old, I was diagnosed with a rare pediatric cancer called retinoblastoma.  Typically people are born with one tumor in the eye and I actually have 14 tumors total – 9 in my right and 5 in my left.’

‘When I was first diagnosed, the doctors recommended that my parents have both of my eyes removed because that type of cancer can go into your optic nerve and brain quickly.  My parents sought a second opinion, so they sent me to Emory in Atlanta.  The doctors there were trying a new type of radiation treatment, internal radiation, so they would sew a radiation plaque in the back of my eyes and leave it there for a little while and then remove it later on and see if it helped the tumor and it ended up working, which was awesome.’

‘Of course radiation is very damaging to the body whether it is internal or external, so throughout my entire life since the diagnosis I have been progressively losing my sight.  I am totally blind in my left eye.  It’s just darkness in that eye and on my right eye, what you see as 20 feet away I see as 200 feet away. I don’t see any details.  I can see shapes of people, their bodies, their size, but I can’t tell who they are.  I see the shape and the color.

‘A lot of kids who have this, they don’t find out until it’s very late until the tumor starts to show on the outside of the eye.  They found mine relatively early because I had a stopped up tear duct in my eye and my mom took me to the eye doctor.  Even though they don’t typically dilate a 6 month old’s eyes, my doctor felt like something was going on and dilated my eyes and found 14 tumors.  I was very lucky.’

‘I was so young, so I give all of the credit to my parents getting me through that time.  I’m sure it was probably harder on them emotionally than it was for me.   My parents were the ones who took the emotional stress of having their child spend her first Christmas in the hospital.  With pediatric cancers a lot, I would encourage parents to encourage their children to live a full life.  I think that’s something my parents did really well.   They didn’t hold me back.  They still allowed me, to the extent that it was safe, do the things my peers were doing.  They allowed me to have as normal of a childhood as I could while I was going through that and I think that helped set me up for a great future.  My parents were really good about re-enforcing that this was a part of my story that it’s ok, that everyone goes through things in life and you’re going to be able to use it to adapt and use your story for good one day.  That helps my mindset now.’

‘It has opened a door for me.  I try to use my story whether through social media or my doctors who know parents with kids who are going through this – to reach out to me.  I do a lot of motivational speaking.  My cancer has led to a permanent disability with my blindness, so I’ve been able to reach out to the disability world and do it with all of those different avenues.  I am very close to the community of other kids who have this.  They are able to find it super early now and in the womb and are able to treat it with chemo now which is way safer than the radiation.’

‘My left eye is a lot smaller and is shrinking in size and just losing some of the fatty tissue around my eye socket and that’s just part of the radiation damage.  I’ve lost a lot of pressure in that eye and go through periods of stabbing and burning pain.   Appearance-wise, as with any woman, especially as a young girl, I started experiencing that change and in my teenage years that took a lot of getting used to and my confidence had to develop a lot at that time.   Now it’s just a part of my story.  It’s a part of who I am.’

‘My biggest message is to love yourself and love your story.  No one chooses cancer, it chooses you and you can have positive experiences coming out of it and by accepting and loving yourself you’ll have the confidence to continue living the life you want to live.  Don’t allow it to keep you from living a fulfilled life down the road.’