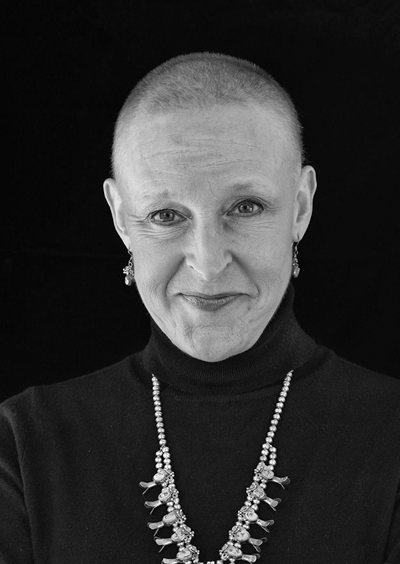 “When I went to the doctor & she gave me a pelvic exam, the whole time I kept saying, ‘I am sure its nothing.’ & she said – literally while she’s giving the pelvic exam – ‘Fritzi, it’s not nothing. You have a mass in your pelvis. We are sending you to St. Francis immediately to get an ultrasound.’

“It’s funny, because the hardest part was hearing the diagnosis – coming to grips with the fact that I had cancer. That was the shocking part. I have a maternal aunt who died of ovarian cancer, & I have my girlfriend Maggie who had gone through it so many times [over 12 years]. So to hear the words ‘ovarian cancer’ scared my husband & me tremendously.

“My last treatment was in October. I did 3 rounds of chemo, then 28 sessions of radiation, & then another 3 rounds of chemo. I lost my hair twice in the process. Just as it was coming back in, radiation was over, & it was time to do chemo & shave my head again. My oncologist, Dr. Larry Puls, wasn’t originally going to follow this new kind of protocol. But he found some research between the time of my hysterectomy & my treatment started, & he & his partner decided they were going to change what they were going to do. I had these interesting little bulls-eye marks all over my abdomen & my back from the 28 radiation sessions. I was quite an interesting sight for a while! I would get out of the shower, & my poor husband – his wife was bald, she had a huge scar from the hysterectomy, & now she’s got these little black bulls-eye Sharpie marks all over her body from radiation every day – & I said, ‘Well, I was trying to convince you that I was hot for our entire marriage, & now I am REALLY hot. I am radioactive!’

“So I am married to the great explorer of the world, Steve Barbour. We’ve done Mayan ruins, underground rivers & caves, the Galapagos Islands, Europe, volcanoes in Hawaii…He’s had me hiking 1600 feet up a volcano in Ecuador. I never would’ve done that if not married to Steve. We just returned from Iceland! He’s been talking about Iceland since we got married in ’98, when he was in the Air Force & was there for 2 weeks. We hiked ice caves, & I went down a teensy little rabbit hole to hike a lava tube underground — I didn’t even know those things existed! We snowmobiled & ATVed & walked on black sand beaches. It was cold as hell, & we had a ball!

“One of the most remarkable things about Larry Puls was that the day of my surgery, when we went in for the pre-op, & they get you ready — he comes in just before to give you an idea of what’s going to happen that day & take questions. My husband Steve & I were sitting there & said, ‘No, no questions.’ He totally caught us off guard; he kind of rolls his little stool over to where I am on the bed & Steve’s standing next to me, & [Dr. Puls] said, ‘Alright, the next thing I would like to do is, I would like to know if I could pray for you before we go into surgery.’ We all grabbed each others’ hands, & he said the prayer. He asked for guidance before going into the surgery, & he prayed for healing if [cancer was] what [he found]. When he ended that prayer, & he walked out of the room, we were thunderstruck! We looked at each other & were teary. I said to Steve, ‘We are exactly where we are supposed to be.’ It felt so good to us to know Dr. Puls had faith & was a spiritual person, & wasn’t acting like everything that was going to happen was because of him or his skills or his training.

“When he told me in November that I am officially in remission, at the end of that appointment he rolled his little stool over to the end of the examining table & he said, ‘Give me your hands. I would like to say a prayer.’ & he gave a prayer of thanks that my counts had consistently fallen to a level of naming in remission at this stage. He has a gift I think. He’s not just talented. I think he’s gifted.

“When you go through cancer yourself, you’re obviously much more attuned to it, or people bring it up in conversation more often & share. Weekly, I get messages from different people I have known from different walks of life — some I haven’t seen in 25 years — & they’re telling me about theirs…It’s one of those things — it’s an unforced gift of cancer. It’s a strange thing that brings together lots of people.”