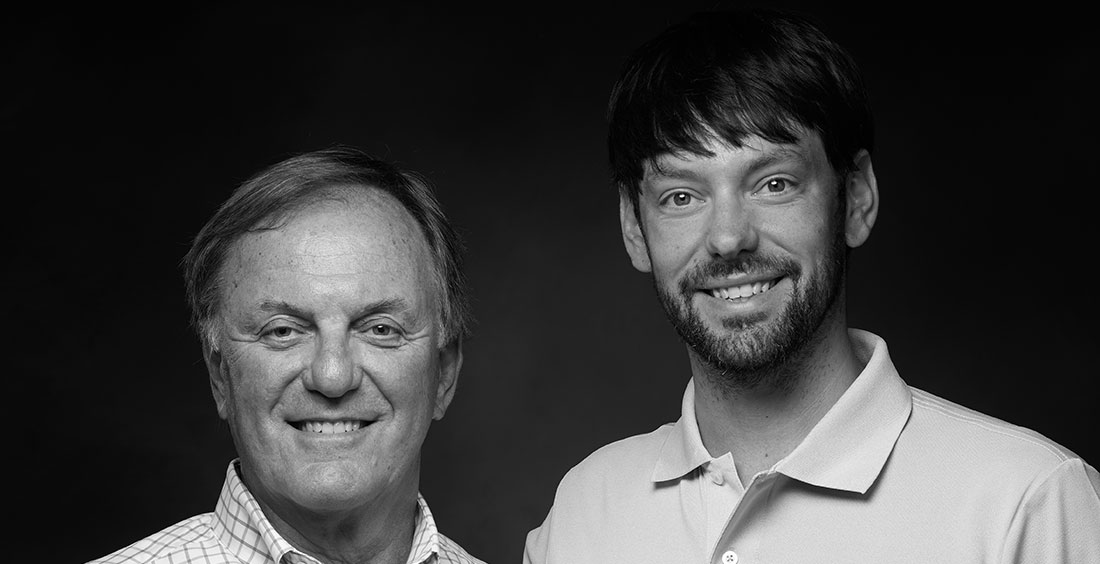 Gary and David Caldwell are two of the owners of Caldwell Constructors. Gary, 66, was first diagnosed with prostate cancer in 2007.   His son David, 35, developed lymphoma at the age of 7.  They represent three generations of cancer survivors. Gary’s father also developed prostate cancer in his late 70s.

David:  I was seven. I was in the 2nd grade. It’s funny the things that you remember. We went to a Cub Scout banquet the night before my diagnosis and I ate a bunch of dessert that night and woke up the next morning with a terrible stomach ache. One of the things I remember is not being able to get out of bed. My mom was so mad at me because I had so much dessert. She said, “You should have a stomach ache.  Get up.” “No, Mom.  I can’t sit up.”

Gary:  The pediatrician thought it was acute appendicitis. We got him to the hospital and all the doctors there thought the same thing.  So he went into surgery and what was going to be a routine 45-minute procedure was two and a half hours.  Then Dr Cary Stroud, one of the pediatric oncologist at Greenville Hospital System, came in and said it was either Crohn’s disease or cancer.  He wasn’t sure until they had done the biopsy. He provided a great explanation and just had a lot of confidence. What’s cool is that we were out for dinner a couple of years ago and here David is, 33 years old and Dr. Stroud recognized him after almost 20 years, if you can imagine that.

David: I just think he’s that kind of person.  I remember how great the entire staff was. I just joined the advisory board of Clement’s Kindness, a fundraising and support charity for childhood cancer. Dr. Stroud, Ruth Cook and Pam Broughton all had a huge impact in my treatment and are still very involved in the program after almost 30 years. These people are really are so special.

Mom and Dad were always just so honest with me.  I went back to have surgery thinking it was just appendicitis and came back and woke up and it obviously was a much different outcome.  I remember them explaining what happened and not really understanding what it all meant. I just trusted them completely and went through the process.

Gary:  We talk. It’s just what we do.  We don’t hide anything because we think that just creates concerns.  Like, what else do we not know about?  We’d rather lay it out there, get support, be aware of issues and help each other.  To us, that’s just a better way of dealing with it.  It’s just honesty, it’s open.  We don’t always broadcast things to everybody else, but among us that’s just what we do.

David:    The chemo lasted three or four months.  I remember getting nauseous a lot, being bald and going to school and having hat days at Pelham Road Elementary School.  Everyone was so supportive and I remember the school having a hat day my first day back to help me feel comfortable with my big bald head!

Gary:  He was such a good sport.  He never missed a beat with what he was going through.  We took him for one of his annual check-ups after his treatment and the nurses were making a huge deal over David’s success.  While we waited for the doctors, David looked at me and said, “I wish they’d stop making such a big deal about me.”  I said, “They need to.  Those other kids need to see success.”  His perspective was really about caring for the other kids that were still going through treatment.

Gary:  Dad lived with prostate cancer for about 10 years.  He was 89 when he died, and his funeral was on Christmas Eve. Two months to the day after we buried Dad I went in for my annual physical.  My doctor said, “Your PSA has gone from 1.5 at 50 to 3.5 at 52 so we probably need to be watching this.”  And I said, “No, we’re going to do a little more than that. I buried Dad two months ago after his long battle with prostate cancer.”

So I went to a urologist and I said, “I want to get it out of here.”  He goes, “No, let me tell you about the options.” I said, “You really don’t need to. You know, like Lewis Grizzard’s book, let’s take that thing out and stomp that sucker flat.”

We ended up going up to Duke.  I met with the chief of urology and he suggested that I do a radical prostatectomy.  He said when he gets prostate cancer, that’s what he’ll do, so I went with it.

I was at breakfast a month later, talking to a guy and his son.  He looked at me and said, “You seem different today.” He sensed something about what was going on with me and was perceptive enough to bring it up.  So there at the breakfast table, we started a conversation about what we were going through.  That’s happened on at least two or three other occasions where people share what they did, what they learned, what they went through. It’s very much a fraternity. There are so many people that are willing to share their story to help others.

Dad lasted 10 years.  I will too. You know it’s actually been longer than that.  It’s been 13 years.   So I just take it as “here’s something that we need to do.”  God will be with us and we’ll figure it out.

There’s a consistency of how the two of us think.  We’ve got obstacles and challenges all the time in what we do for a living.  We get up every morning and most of the days are good but we have those days where we hit some road blocks, but you just work through them.  Like in treatment, David’s was surgery and chemo, mine was surgery and radiation and ultimately we finished the treatment.  But just evaluating what’s in front of us and what we’re going to do and let it run its course and not be overwhelmed.

David:  Overall, the mentality of knowing what’s really important is key. You can’t sweat the small stuff.  There’s always a lot to do, and plenty of learning opportunities in our business that you have to deal with. There are lot of pretty strong personalities and people can tend to get pretty heated sometimes. If you can just keep an even keel and keep it all in perspective, you can overcome pretty large obstacles. Having the right mindset is the biggest thing I’ve learned from both of our situations.

Gary: So in 2010 when my cancer came back, one of the things I said immediately to my wife, Leigh, is that if David can do it as a kid, I can do it as an adult with the same spirit.  I found an Oncologist, Dr. Britt Bolemon, who has been just incredible for me the last 6 years. He gave me confidence about the treatment plan, and a great calm about the situation.

David:   I knew he would get through it because he’s the strongest man I know.

Gary:    I was asked to be chair of Leukemia and Lymphoma Society Light the Night Walk.  So we were at the kickoff luncheon and it was my time to get up and tell my story to the crowd.  I had a story to tell and I had kind of structured it in my mind and I felt fine.  I stood up, got to the podium, I said about two words and that feeling came, just where, oh, my gosh, I can’t do this. The emotions were just swelling and I couldn’t talk.  My natural thing to do was to look at David.  What in the world am I going to do?  David had this great smile on his face and he looked up and he said, “Dad, I’m ok now!”  We all laughed and it relaxed me and I believe we pretty much did the rest of the story together. It can be emotionally exhausting, but with a good support structure around you anything is possible.