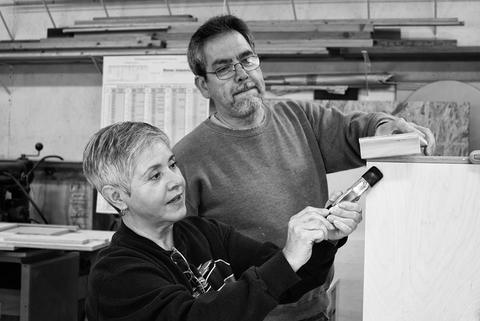 “Seven of my family members have had breast cancer, & 2 have had ovarian cancer. I’m unique in that I have survived both.

“I was first diagnosed with breast cancer when I was 36. I was afraid this dreaded disease was going to take me like it did my mother, who passed away when she was only 40. I had a mastectomy on my right breast…I have to say, the prosthesis wasn’t fun. It was a constant reminder of a battle lost but a war won. Then 10 years later, my other breast got cancer. You can imagine how angry I was that this disease was claiming another portion of my body. This time I decided against chemo, but I underwent breast reconstruction. I felt I was too young to lose my self-image — darn those supermarket magazines!

“I wish this was the end of the story, but 2 years later, I was diagnosed with ovarian cancer. The disease is bad enough, but the timing was worse. My husband [Luis] got a new job, & we were planning to move to SC. It was quite a test of spirit to have surgery & chemo while being apart from each other; but all went well & after 6 weary months, I joined him in Greenville.

“In 2010, I had some discomfort on my right side. The CT scan showed no evidence of cancer, but I agreed to have laparoscopic surgery to remove my gallbladder, & they found ovarian cancer on top of my liver. Even the doctor was surprised with what he saw. I believe it was divine intervention that guided me to have surgery once more. In 2013 cancer came calling for my spleen, & I had to sacrifice another body part in my war against this disease. Then yet again, 2 years later, I began experiencing some digestive problems & thought, ‘Might the enemy be knocking at my door once more?’ Though I was diagnosed with abscess diverticulitis, a follow up colonoscopy revealed ovarian cancer cells in my colon. Once again, divine intervention led to the discovery. A partial colectomy was done & once again, I decided not to do chemo, even though the doctor strongly recommended it based on my history. But I believed God was leading me, & I wasn’t afraid.

“…Wow! I’m a cancer survivor of 19 years already…I have been blessed over & over again. My last CT scan showed NO evidence of disease and my CA125 blood work was low.

“My husband has been my strength & my rock. He makes me laugh when all I want to do is cry or be angry. He’s dealt with this terrible disease with faith as well. You might say he’s been a prisoner of war in my battles with cancer. I’ve also been blessed with good friends, neighbors & family members, who see me as normal and don’t treat me like someone who has been afflicted by cancer, or like I have a contagious disease. There are so many of us from different ages, races & religions that are affected by cancer; but at the end of the day, we are all the same. We are one…Modern medicine has been a big help for many of us. It’s created treatments so that cancer is no longer a death sentence. A positive attitude goes a long way. I always say that when we’re at a low point, there are others who are worse off than we are; I need to focus on my abilities & not my disabilities, & to cherish what I have now.”