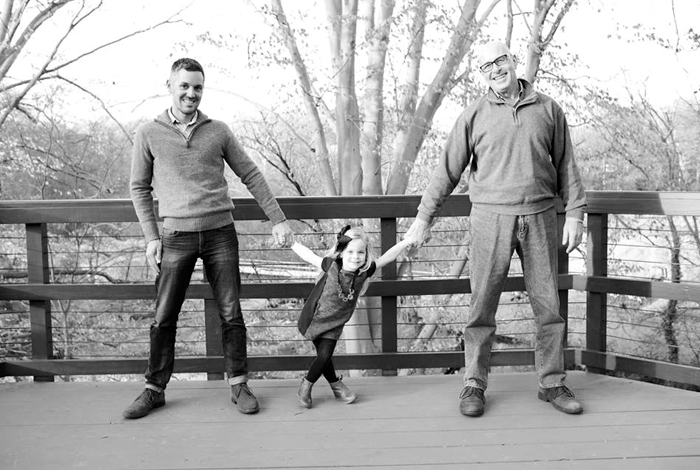 This week, we revisit a family that has been featured in our Survivor Series before. Last year we profiled Lindsey Bates Motley, who at the time was fighting colon cancer. This past Thursday, Feb. 23, was the first anniversary of her death, so we checked in to see how some of her survivors were doing.

JAY: “Everything is going really well, actually. Lilla is doing well. She is in school, & we still talk about Lindsey a lot. She brings her up, & we still have pictures around the house, so we talk about her a lot. Things come up all the time — she’ll say, ‘I remember this & this with mommy,’ or something like that. One of the things I was most worried about was Lilla, & how she would adjust. How it would effect her. From all that I can tell, it seems that she is doing really well.

“When I knew Lindsey was sick & I might need some guidance on the best ways to talk to Lilla about it, I did a little research on the internet. I found a place out in Portland called the Dougy Center that specializes in children who have lost family members. They had a lot of information on their site about grieving for kids. They actually had a handout sheet, & I looked that over, & I thought that the way they talked about it & their method was a great little tip sheet. I took it to her school & showed it to her teachers, & said this is what I am going to be doing at home, & giving to the aunts, uncles & grandparents. It said things like, speak openly & honestly about death. Don’t hide it, because the children, of course, would be asking. I just say, ‘Mommy had cancer. She was really sick. The cancer made her body quit working, so she died.’ You should make it honest & open, & not make it confusing. They suggested calling it what it was – cancer – and not just saying, ‘Mommy got sick,’ because then the kids would get worried that any time they got sick, or a family member did, that they would die, too.

“I definitely see a lot of Lindsey coming out in her. I think she starts to look more like her every day as she gets older. In a lot of ways, she has the same temperament. It’ll be interesting as she ages how much of Lindsey comes out in her.

“Honestly, for me, I think the most interesting thing from the past year was the surprise…I thought the first few months would be the hardest part. Like right when she died, your world would be turned upside down, there would be all of this stuff to take care of. That was certainly hard, too – but it’s surprising that it gets a little harder I think, the further out you get. I don’t think I expected that. The last few months have probably been harder than it was right when she passed away. I think as time goes on, you just start to miss them more. Right when they pass away they were just there recently. You don’t have that longing – I think that was something I didn’t anticipate going into it, and that would be good for other people to know. To not be surprised & be caught off guard if it gets harder, or if you start to miss them more further out. The grief comes in waves; it ebbs & flows. A wave might come; you have to deal with some sadness or grief; & then it gets better.

“I am still figuring it out myself as I go along. It’s hard, there’s no other way to say it. You can’t really sugarcoat that having a child, losing your spouse, & then trying to put it all back together & still work, figure out about dating again, & all kinds of stuff like that is a challenge. But, you know, you figure it out!”

TOM: “ ‘The next right thing’ was one of Lindsey’s sayings. She always said, ‘All you can do is the next right thing,’ & that’s what she did until she couldn’t do that anymore. We live by doing the next right thing. What has gotten us through this is faith. It’s by faith & not by sight that we know, & that you have to think about this in an eternal sense. I think we’re a blip on the radar. I am at peace with all of that. This isn’t the end. I think wonderful thoughts like, Lindsey’s with my mother, who she never met, & others!

“I lost my mother when I was 10 to ovarian cancer. So I remember as a little boy – that was 52 years ago – riding in the family car from the funeral to the cemetery, & I just saw that life kept on going on. I saw garbage men picking up garbage. I saw kids laughing & playing. I remember seeing all that & thinking, ‘Don’t you know what just happened to me?’ But you know, life goes on. I know I will see Lindsey again. I think in terms of eternity, not just here & now. There I was as a child, watching my mother go, & then there I was as a father watching my child go. I think sometimes maybe this was all preparation. Nothing takes the sting away – grief is like learning another language that we are still trying to learn, & there’s not a Rosetta Stone for this. You’ve got to live & breathe it.

“The first anniversary of Lindsey’s death was a tough day & a good day at the same time. It certainly was a different day. It was a day of remembrance & reflection. How wonderful she was, how many people she touched, how courageous & brave she was. It’s sad. It’s happy. It’s every emotion that you have. There were tears, & there was laughter. It’s kind of like the funeral again – seeing and hearing from people you haven’t seen or heard from in a long time. Their remembrances of her, & how they were affected not just by her death, but just by knowing her.

“I am just so proud of our family. Everyone is doing so well. Everybody has a piece of Lindsey in them, & that’s what’s great. I can tell you from a ‘Poppy’ point of view that it’s amazing how well Lilla is doing. What I follow is Jay’s parenting of her. He does an unbelievably exceptional job. He doesn’t hide things from her. He is very forthright about it. He does it in the right way. He keeps Lindsey as part of Lilla’s life, so that she will always know who Lindsey is. That’s the part that I love. Lilla has a good life. She doesn’t have Lindsey – none of us do – but she certainly has a lot of caring & loving people that are around her all the time.

“I think Lilla is a gift that Lindsey left us. Lilla was part of this terrible disease with her mother & is the end product of a very hard fight. I think she’s kind of a parting gift for us.”