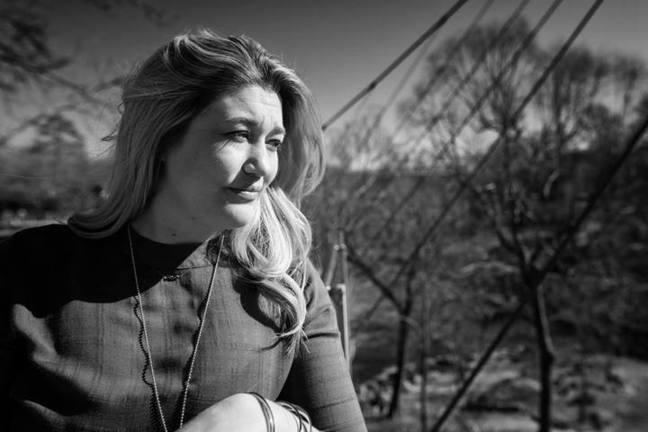 “Tim was the one who wanted the wedding. We were engaged for almost 18 months [when he was diagnosed]. Everything planned & everything done except getting out invitations – those final little things. We decided to make our lives as normal as possible, & try to make the cancer disappear in the background & not have to think about it. In the hospital, we were literally putting the bands around the invitations & getting everything stuffed into envelopes. Family & friends would come to visit, & we had them helping out in the assembly line getting everything together. That was early February; he started his first round of chemo March 3. The wedding ended up being a fun day. It ended up being a much bigger wedding than we could’ve ever anticipated having! We had a quick little mini-moon to Old Edwards Inn & came back for him to get his next round of chemo that Wednesday.

“I was so naïve at that point in time thinking, ‘Oh, he will have treatments & be in remission & be fine.’ Then the other part of it was we were just an instant thing, from the minute we saw each other when we met after college. I was planning on marrying him for so long that, for me, [the illness] was just part of the wedding vows – part of the ‘in sickness & in health.’ I guess my thing was, those don’t start the day that you say them; they start the day you decide to share the rest of your life with someone. For me, it wasn’t a choice. We were going to have a big wedding or get married in a courthouse, but one way or the other, I knew I wanted to marry him no matter where we were with everything.

“Obviously the hardest part now is him not being here – the constant companionship. We just were so bonded, you know? Another person who you can just feel off of – where they are, what they need – & you can communicate with without having to speak too much to each other. Having to reach out to people to explain what I’m thinking, what I’m feeling – it’s just extra work that for almost 10 years, I didn’t have to do. That’s been hard, but the other part of it is that we were so closely integrated with one another, I don’t know who I am anymore. I don’t know what I like, what I want. We did everything together…we found things that we both liked, & then too many of those things became a reminder of Tim. It was months before I could even think of drinking a Coke.

“But God’s there where you need him. He shows up. All these mysterious things happen right when you need them to. Lately those things have held to be true more than I’ve ever seen before.

“Tim’s favorite number was 8. He was obsessed with that number, & all his jersey numbers were 35, or 17, or 53 & so on. The other night before that big lottery, I was really frustrated, & thinking about how I wished there was some clear & obvious sign that Tim was still around, & I was also kind of writing a list of things I needed to do or get the next day. I included getting cash at the ATM so I could buy a lottery ticket, & in that same moment, I was moving some stuff around & found $8 in cash. It’s things that I can’t really describe or make sense for – weird stuff that when you’re experiencing it, it’s completely surreal. There’s a bigger power watching over me.”