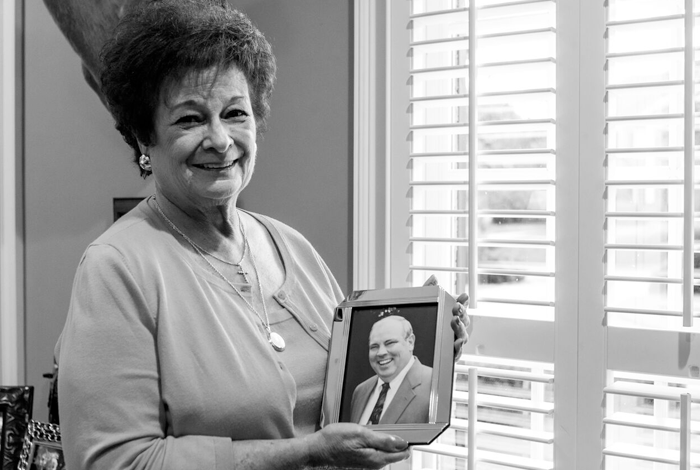 “They didn’t expect David to live long at all, but he ended up living 14 years almost to the day. From the very beginning, David was determined that whatever time he had left, he would make the best of. He was a very positive person. He was like a magnet – people were just drawn to him. He laughed a lot & joked a lot.

“At that time, when he was sick, there was not all of the help outside of the medical field there is now. We had to find everything on our own. We drove to Columbia for an acupuncturist. We drove to Atlanta for massage therapy. We drove to Tryon for another kind of therapy. The muscles behind his lungs got scarred through doing chemo & radiation at the same time, so the muscles were rigid, & he had a lot of back pain. He went anywhere to try if something could help him with his pain. Now they have all those things in house. I know he would be pleased about that. But there was no support group for lung cancer patients; they didn’t usually survive long enough, so he was really out there on his own to find resources to make his quality of life better.

“He also never gave up. Until the very last weekend of his life, he was determined to fight. He gave it all he had for 14 years. People at the Cancer Center called him the miracle man. He took a gift bag of fun-sized Snickers every time he went to the doctor, & he would give one to everybody who touched his life: the doctors, the nurses, the receptionists, the patients in the waiting room who looked like they needed a little smile, children there with their parents.

“He was a very caring & loving person. After it looked like he wasn’t going to die right away, he wanted to do something for the people who had helped save his life. Dr. Giguere was his oncologist, & he and Jeff had formed a good friendship. They both had wonderful senses of humor. David said, ‘Jeff, I’ve got some money, & I want to do something in the realm of cancer – do you have a pet project?’ Jeff said, ‘Well, as a matter of fact, there’s this group trying to get off the ground, & they are struggling a little bit. It’s called Patients First (now Cancer Survivors Park Alliance).  It’s a patient advocacy program. Their mission is more educational, but the first project they are going to have is a big Cancer Survivors Park.’ So David got interested in that. At that point, they had a committee & ideas, but really didn’t have any funds. The gift David gave was really the seed money that helped them get things off the ground — pamphlets printed & mailed to get the word out & things like that. We ended up being on the board. It became too hard for him to do it, but I stayed on for a number of years. It started getting momentum, and the Park was going to be the flagship program. Patients First eventually became the Cancer Survivors Park alliance.

“A few months after he died on Fathers Day in 2011, we had the opportunity to make a donation in David’s memory. I knew that were he alive, that’s what he would’ve wanted. There was no question in my mind that I wanted to get involved. It was proposed that we give the money for the Pavilion.

“When we first were on the board and talking about the Park — that was before HIPAA was created. One of the things that excited David the most was that they said there would be an educational center & there would be a computer there, where you could type in your type of cancer. The names of the people in the area around Greenville who had that would come up, so you could contact those people & talk to them. You wouldn’t have to feel like you are hanging out there all by yourself. He said, ‘I want to do that. That’s what I want to do for the Park. I want to provide the resources for that to happen.’ Well HIPAA came in & you cant do that now — they can’t give you the names & contacts of people. But they are going to have this educational center underneath the Pavilion, where you can read about whatever type of cancer you want to read about & other resources.

“I like the idea of this Park being a community-wide thing – cancer doesn’t just effect one person or just the family. I think it’s so widespread there are very few people in Greenville who haven’t been touched by cancer in some form, & to me, this is making a statement to let people know that there’s hope. Don’t give up. The Pavilion we are giving comes up to a point that reaches up to the sky. I think that’s one of the best symbols, & to me, the hope is not on the ground. The doctors & people around you give you hope, but your biggest hope comes from above. We wanted this park to be a place of reflection. I hope it is going to be used & enjoyed by everybody — whether you’ve been touched by cancer, had it & survived cancer, lost someone to it. It’s for everybody.

“Within the confines of David’s illness & him being on oxygen for 10 years, he lived his life as fully as anyone could’ve lived it. He lived to see all 4 of his grandchildren born; both his boys graduate college; one graduate from seminary. He lived to see both of his parents pass. He lived a long time well, & that I think is his legacy. He taught people how to live through trials with grace & dignity & humor. If he was sitting here right now, he would probably say, ‘Don’t put my name on that building. Just build the building.’ He was a very humble person, but he had the biggest heart — & actually, a large heart is what took him, & when I called a friend to tell him he said, ‘Well, he always had the biggest heart. I am not surprised.’”