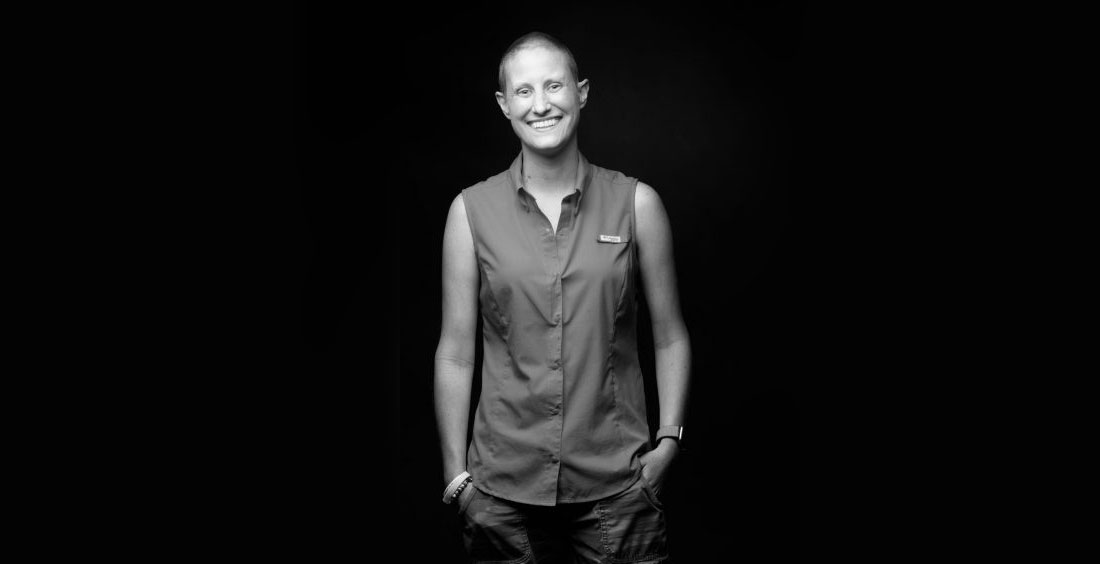 When you’re first diagnosed, you’re in shock. You don’t know what’s going to happen. You don’t know much about the disease and you’re scared. I first got diagnosed when I was 29 years old by Dr. Scott Porter at Steadman-Hawkins. He’s an orthopedic oncologist and is an amazing doctor. My regiments was to have chemo, then surgery, then chemo after surgery.

After the surgery I was just very angry and needed some peace in my life. That’s why I started hunting. I’ve always been an outdoorsy person and I found hunting therapeutic for me. My Uncle Johnny provides the farm and we enjoy going together. I love going out before the sun comes up and getting to see everything come to life. Then when you go out in the evening you get to see everything kind of quiet and peaceful. It was a really spiritual thing for me. It calms my nerves and let me know that everything was going to be ok.

I was told if the cancer was to return, it would likely come back within 2 years so when I went for my 5 year scan and a 5 cm mass was found in my left lung, you can imagine the surprise it was to me. I had no idea it was there especially since at the time I was participating in hot yoga classes! I had gotten a 90% kill rate on my tumor so I figured only a 10% chance of the tumor returning. I had a lobectomy performed by Dr. Bolton (a doctor at Prisma Health). I returned to my first oncologist for a recheck and found there were other cancer spots existing in both my hips and my pancreas and adrenal gland. My oncologist said I was terminal, there was nothing more he could do and to just get myself in a clinical trial at MD Anderson…maybe they had something for me, we are looking at quality of life now.  I could not believe what I was hearing. Anyone who knows me, knows I’m not a quitter. I quickly found another oncologist, Dr. Britt Bolemon who understood me better and suggested a regiment but wanted me to visit MD Anderson for a second opinion.

At MD Anderson, other cancer spots were found – in both my hips and my pancreas. I found that Dr Bolemon and MD Anderson were basically on the same page so I began chemo again. After many rounds of chemo, MD Anderson offered me a clinical trial. I agreed to enter the trial and was the first osteosarcoma patient to do so. After months of being in the trial, MD Anderson informed me the trial had not worked based on my latest scans. After that devastating news, MD Anderson just didn’t seem to be as forward looking about things. I returned home under the care of Dr Bolemon who was still upbeat about my cancer.

I’m satisfied with my care now. Dr. Bolemon is amazing and very aggressive, which I am too, so we match perfectly. I can’t say enough good things about the doctors I have, nurses and technician’s care at Patewood.

As you are going thru cancer, you kind of figure out who your real friends are, who’s going to be there for you. Some of the friends I thought I had, I couldn’t depend on but now, I surround myself with people that are going to be there and are positive influences in my life. My family, even extended family, have been the biggest supporters that I could ever ask for. They would give up anything to help me. My husband’s been my rock and my shield. He won’t let me give up. He sees when I’m struggling and picks me back up. He doesn’t push me. He motivates me. He makes me want to be around.

My parents, step parents and mother in law have been awesome. My dad’s always there for me and my step-mother has helped me a lot the enormous amount of medical paperwork. My mother-in-law has cooked (too many to count) dinners for my husband and me. My step-dad has helped with his devotion of time. My mom’s my best friend. I told my parents that nobody deserves to suffer this much pain to live. My mom says, “Well, Katherine, if I could take it away from you I would endure all your pain.” I’m thinking, “No, you don’t deserve that. I wouldn’t want you to.” And she says, “Well, if you had the chance to give the cancer away, who would you want to have it if not you?” And I was thinking, how about the bad people out there….but that’s not God’s way.

My nephew brings the biggest smile to my face and much joy in my life.  He comes to Clemson a lot and he loves me unconditionally.  He makes me so proud as he’s good in almost every sport.  He is playing in many golf tournaments this summer! I used to play golf too, so he’ll listen to me when I say “Jack, calm down.  Take a deep breath.  Everything’s going to be ok.”

The most helpful thing is knowing that people are thinking about me or praying for me. I get texts or cards in the mail….That always seems to brighten my day a little bit. I’ve had several strangers approach me and ask if they can pray for me. I’ve tried to carry that along with me. A friend at the cancer center, Marcus recently passed away and I was the one to introduce myself since I don’t usually see folks our age and we kind of had a connection. One of the nurses we had together at Patewood went to his funeral and his parents said, “Please tell Katherine we’re praying for her.” It is very hard when you hear of someone you knew from the cancer center dying. But I’m still fighting and have been for two years. So my advice is to not listen to the negativity. I wouldn’t be here today if I had listened to my first oncologist.

The greatest thing I’ve heard is “You inspire me.” To know that you’re just walking down the street without anything on your head and you‘ve inspired somebody who’s been wearing a wig or just been diagnosed, you can help them just by being yourself. Once I even shaved my own head!. I had random hairs standing up and just took my razor. . . and asked my husband, “Did I get the back?” He said, “You did a really good job!!”

The biggest surprise is some doctors (not my doctors here) sometimes try to “lighten” the diagnosis, so when you read the reports, the reports sound much worse. I’ve learned not to pay attention to the reports as much as I need to because I become fixated on them and I don’t need to do that. I’ve had two benefits coordinated by wonderful friends in the Clemson and Aiken communities. Both events were awesome. The two raised altogether over $130,000 which has definitely helped with medical bills and our financial household responsibilities. I didn’t know how much I was loved.

I’m not giving up. There’s something coming around the corner. Definitely don’t lose hope. I just have a feeling that something great is about to happen. Don’t be discouraged. Push on. Even on bad days, the next day could be better. Live one day at a time and live your best life you can. I’ve definitely learned to live every day to the fullest because you never know when it’s going to be your last. I don’t think a lot of people do that, think that way but being faced with a terminal cancer, you learn to let the small things go. Be your best every day.