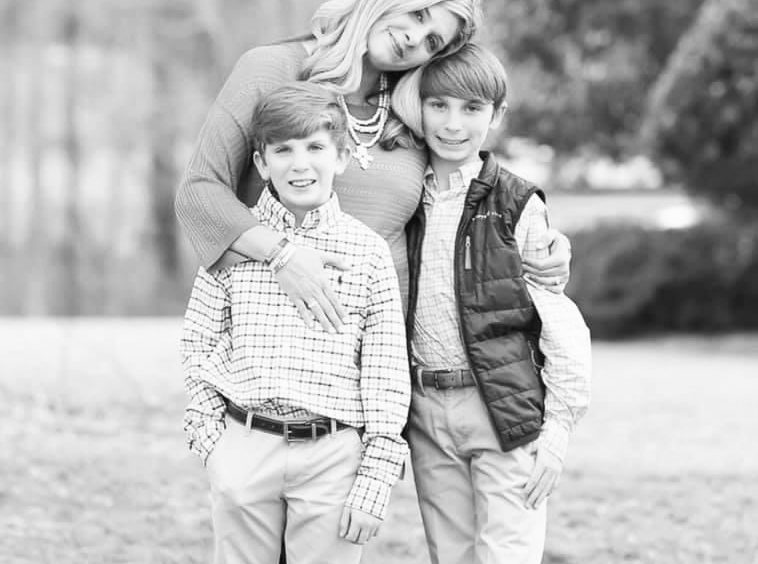 “Root yourself in faith. Cling tight, dig deep and never stop believing that there is a purpose in the pain and that your test can become a testimony.”

That is advice that Valdosta, Georgia, native Katherine Trickett has for others that are battling cancer themselves or have a loved one that is going through the journey.

Faith has been a cornerstone for Katherine, a physical therapist, wife and mother of 2 boys, since she was initially diagnosed with breast cancer on February 10, 2020. In fact, it wasn’t just breast cancer – it was “Triple Positive” breast cancer, a type that is found in only 20% of breast cancer patients.

“I initially went numb. You just don’t prepare yourself for that type of news.  I had gone in for a routine mammogram, and they had called me back because I had dense tissue. It’s routine to get a callback because of this, so I still wasn’t worried.  But, and this is the bad thing about being in healthcare, when they performed the ultrasound, I could see the screen and knew immediately something was wrong.”

After battling through the initial shock and going through a range of emotions, Katherine felt a calmness come over her, and she knew that her faith in God was going to be one of the main reasons she was going to make it through her journey.

“I go back and look at my journal entries from the early days, and from the get-go, I had a sense of peace because of my faith. I just knew that it was going to be OK – even if it doesn’t end great, it was the Lord’s plan. I think I only had this sense because of my relationship with God.”

Her faith was tested from the beginning. While there may not be a “normal” journey through cancer, some paths do take the traditional “diagnosis, treatment, result” route – not Katherine’s.

In less than 48 hours after completing her first round of chemotherapy, she was in the ER with a perforated bowel due to side effects from the treatment.

“So, my doctors and I had this great treatment plan in place, but now my cancer journey had to take a backseat to bowel surgery. We just had to veer off course and tackle this other issue.  That’s something I would tell others – Respect the “plan,” but don’t get married to it, because so many variables can affect it.  My original “plan” went way different than expected, and that is all right.”

With a successful bowel surgery behind her, Katherine focused on getting through the remaining 5 chemo treatments – a feat she just completed in October 2020.

“I checked a huge milestone completing chemo. I had mixed emotions though, because the chemotherapy was the thing that was stopping my cancer, but it also almost killed me with my bowel issue.”

Her lumpectomy was successful, and the doctors said the lump appeared to be localized and they were able to get “clean margins” during removal.  Her next step is 15 rounds of radiation and continued Herceptin infusions, and then just annual mammograms, so the outlook is looking bright for Katherine.

“I remind myself over and over not to have resentment towards my diagnosis. I have peace that this is God’s journey for me.  If I help people and if anything good comes out of this, it is because of the Lord.”

And the idea of helping others is paramount to Katherine’s journey.

“If one person decides to get a mammogram because they saw what has happened with me, or if one person has a little seed of faith planted in them because they see how faith has helped me through my cancer diagnosis, this journey is worth it.”

“Each day that I wake up, have breath in my lungs and a heartbeat, I’m trying to see it as an opportunity to thrive, not just survive.  Some days are easier than others, both physically and mentally, but overall, my Faith has provided me the strength to persevere through each obstacle and celebrate both the highs and lows of this continued journey.”

Katherine also speaks to having a strong support system in place when going through a cancer journey.

“Surround yourself with good people…. people that will hold you up spiritually, physically and mentally. Let them help…. it is a blessing for them to serve you in a time of need.  One day, you will be the one that is able to bless and serve others.”

And it all comes back to faith for Katherine.

“God’s plan is the only real constant and truth.  Cling tight to your Faith.  His promises are the one thing that will never change in a sometimes unpredictable journey.”