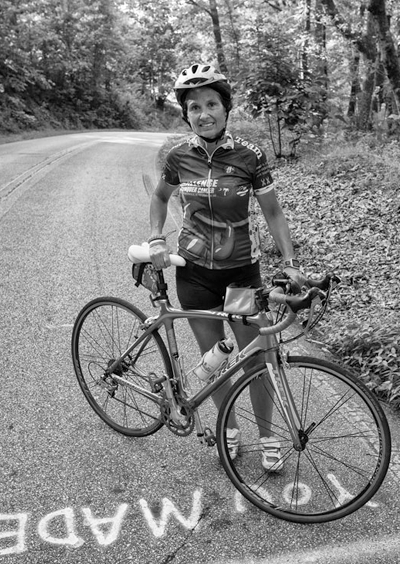 “My father survived both prostate & rectal cancers, both of them found through his yearly physicals. He’s retired military, & so he was so used to getting them. I think that’s why he’s still alive today. It was still in the beginning stages, so he was able to combat it.

“I have a friend [Ron Jerina] that I’ve had for years & years. He & I started running & doing marathons together – I’m primarily a runner. His father got sick with cancer [& ultimately] died, & my friend said, ‘I want to raise money for cancer research, but I want to ride my bike.’ So I said, ‘I’ll go with you,’ & I bought a bike.

“So the money we raise for the Challenge to Conquer Cancer [c3ride.org] — a very significant amount goes to Greenville Health System for ITOR & research drugs. Two of my friends – one with breast cancer & one with kidney cancer – they’ve both been recipients of those drugs. To me that means our money is going to something significant; it’s saving peoples lives. That’s why I keep doing it. What they go through is so traumatic, the least we can do is fight for them.

“We went to Austin, TX 5 years in a row [because of the Livestrong program]. The past 3 years, we’ve been riding to Lewiston, MN [where The Patrick Dempsey Center for Cancer Hope & Healing is]. We go to the Patrick Dempsey Challenge. Each time ride, you have to raise $5,000. Since my father got cancer the same year we started doing this, I was able to ride in honor of him. I was able to raise money through his friends & my friends. I started by sending out letters to my father’s Christmas card list. It’s the generosity of others that lets me continue to go on this ride. There’s no two ways about it. I just can’t get over the generosity of people. I just feel really blessed that I’ve been able to raise money, & have the fitness to do the bike ride.

“This year we have 12 riders. Most of the people who do this ride have had cancer themselves, or have been affected like I have through family & friends. There’s no one that hasn’t been touched by cancer. Once I started doing this ride, I found out about so many of my Greenville running friends; many who were doing, or had done, chemo for breast cancer.

“What I’ve learned about cancer is the people who go through it have such amazingly positive & resilient attitudes. We can learn a lot from them. I can’t get over the love I’ve seen in the chemo room. Isn’t it crazy that we know so many people that have fought & won? It’s a great thing. It’s a great, great thing.