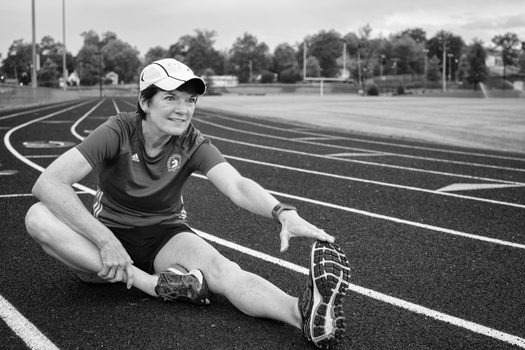 “This year was my third Boston Marathon & my best one yet. My training went well, & I had a solid run & it was fast enough to qualify me to go back next year, which among runners is kind of a big deal. I’ve run 20+ marathons over the last 30 years. It may sound odd, but marathon running is probably good training for going through cancer treatment — both are hard & sometimes painful, but the key is to keep going & don’t stop until you finish! The main difference, of course, being that people choose to run marathons — but no one ‘chooses’ to get cancer. During my five months of treatment, I was able to continue to run a little, although I mostly walked. I was on a three-week chemo cycle, & usually by the end of the second week I’d be strong enough to run slowly.

“I adopted the philosophy that if I couldn’t run, I’d walk, & if I couldn’t walk far, I’d walk as far as I could. My running buddies were great support & would walk with me when I wasn’t strong enough to run. After the treatments, it was great to get back to normal running. While I was in treatment, I set my sights on running a half marathon in Williamsburg, VA several months after the treatments ended, which I did with my husband [Kent], sister, & a good friend — it was awesome. I’ve run 12+ marathons as a ‘survivor’. The message in that for people who might be in treatment now is that there are lots of positive possibilities post-treatment, even though it might be hard to imagine it while they’re going through the treatments & not feeling so good physically, mentally, or emotionally. DON’T GIVE UP!

“[My advice to those experiencing cancer is] be good to yourself and take each day as it comes. A day or two before my surgery, I bought a ‘Life Is Good’ hat for good luck, & wore it throughout my treatments (especially when I had no hair!) — so you might say that was the attitude I tried to keep throughout. Cancer is really hard on the family members & caregivers too, & they need to take care of themselves while they’re taking care of the patient. While it may not be possible for everyone, getting enough sleep, some exercise, & an occasional break is important so they can stay positive & ‘up’ for their loved one. It’s a team effort, really.”