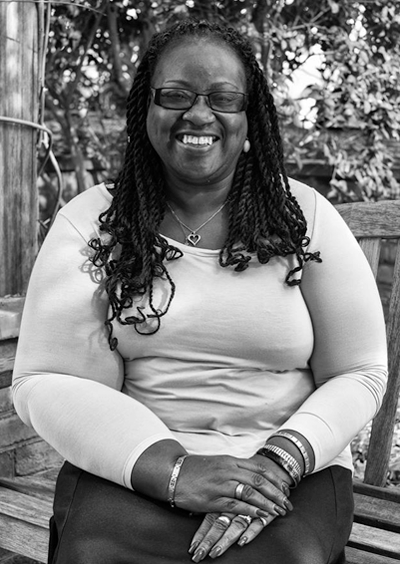 “[They] had to remove my right breast. Then two weeks after that, I started doing chemo. I did chemo for quite some time, & then I did radiation for 6 weeks. I had to stop one week because it had burned me.

“The other treatments had worked, but the cancer was so deep, they wanted me to do a stem cell transplant as precautionary measure. My [still current] doctor was talking to me about doing it ASAP; but I said, ‘Nah nah, nah. I am going to have to pray about this before I can do anything!’ So my family & I got together, & we prayed & we prayed. After a week, the Lord spoke to me & told me, ‘You know, it’s time. Go ahead & do it.’ So I did, & the first Tuesday after Labor Day in ‘98, they put me in the hospital. They had been running tests & all that, & pulling my cells. They froze those, & then they put me in the hospital & did chemo 24 hours a day for 4 days. Around the clock for 4 days straight! After that, they gave the cells back that they had taken from me & frozen on that Monday. So I had to stay in the hospital 21 days.

“At this point in time, you couldn’t eat out; you couldn’t go out unless you have a hard mask on; you had to stay in your house when you got home. You can’t eat any salads or bananas or apples or anything with a peel, because it might have bacteria on it. You couldn’t be around any children under the age of 10, because they carry germs. I had to sit at the house all day. I read the Bible; I studied; I watched TV; I slept. I played games & all that stuff. I couldn’t be out for long periods of time. I still had to wear that mask for quite a while. People look at you like you’re crazy! You couldn’t use the little paper ones – you had to wear a hard one, like the ones people wear when they cut grass, so nothing could get through it…It was like sometimes, the walls would start to close in on you. If you went outside, you had to go & get in a car. You couldn’t just walk around outside.

“I was like the 6th or 7th person to do [stem cell transplants Gibbs Cancer Center & Research Institute]. It was very new back then. You had to run through all types of tests to make sure you’re strong enough, like bone scans.

“I had been in remission, but last year, I had breast cancer in my left breast. It wasn’t as big as a pea, it was so small – they caught it on the mammogram. So I went ahead – I had a choice – & I had it removed. I had genetic testing. They have a new process that they go through, where they send your cells off to a big lab in California, & they tell you if you need chemo or not. I didn’t need it! It was great! I had been praying about it.

“Everything I do, I turn it over to God. I have to pray about it! The doctors – they are good doctors. But I have to listen to Dr. Jesus. That’s my doctor right there! If he says no, I don’t do it. If he says yes, I do it. I have to pray about it & give it to him before I do anything. It’s just like – I don’t know – it’s just something all of a sudden in my mind that says, ‘Now go ahead. Everything’s going to be alright.’ It’s hard to explain.