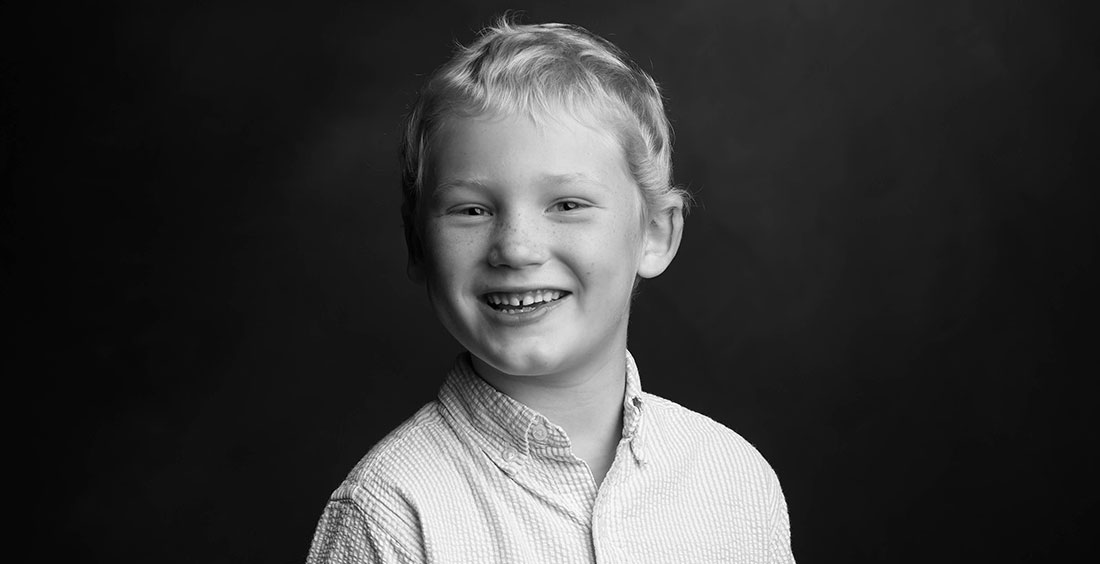 MADDOX Rehn, age 6.  Older brother to Beckham, age 3.  Diagnosed with leukemia July 2019.  Loves swimming, jumping on a trampoline, being in a boat, fishing, and his kitten, Kitty.  Also likes the PRISMA nurses who give him hugs and finger pokes.  Nicknamed “Miracle Maddox” by his care team for his resilience and rapid response to treatment, he has good advice for other children facing cancer.  “Don’t be scared, and take your mom with you.”

It’s so crazy. Maddox’s not a complainer at all. They told me, after he was diagnosed, they said, “He feels awful.”  But he never told me that.  He is super active, played baseball while he was sick.  Didn’t know it.  Jumped on the trampoline.  Swam. Maybe two months before he was diagnosed he was saying his stomach hurt, bad, and he wasn’t wanting to eat.  I am gluten intolerant.  So when he would say his stomach hurt I thought he had a gluten sensitivity, like I do.

We’ve always gone to the lake.  We went to Door County (WI, where grandparents live) the week of July 4th and this week on Lake Michigan he didn’t like riding in the boat.  He said it made his stomach hurt.  I thought maybe he had motion sickness, maybe that’s new.

So we flew home Sunday night and on Wednesday our nanny called and said, “Ashley, his stomach hurts so bad.  He’s on the floor.  He won’t stand up.  His stomach hurts. “So I came home from work and he was lying on the ground super pale and I remember thinking, “Man, he must be in a lot of pain if he’s this pale.” So I thought it was his appendix about to burst.  I told my husband, “Ok, I’m taking him to the ER.  His appendix is about to burst.”  Then he spiked a fever.

My personality is not boisterous, but I was like, “I’m not going home.  Something is wrong.  I know it. What explains the fever? I want you to look at the appendix one more time.”  They said, “Ok, we’ll do an ultrasound and blood work.”  They came back and said, “The appendix is a little bit inflamed.”  I said, “See? I told you!  I knew it!”  They did the blood work and came back and said they were going to do a second vial because [with] the first vial, the saline solution they rinsed the i.v. with got mixed in with his blood.”  When they came back after the second time, they said, “We have a room for him. He needs to be admitted right now.  We don’t know what’s wrong, but something is and he needs three blood transfusions right now.”  That’s why they were thinking the saline solution was mixed in.  He had no red blood cells.

It was midnight.  They started blood transfusions but they didn’t know.  We were meeting with specialists all through the night.  Thursday they figured it out.  It was leukemia.   They never let us leave.  They had him scheduled to get his port placed and started with the spinal tap, the bone marrow biopsy, and chemo.  My husband and Lolly and Popeye (Ashley’s parents, Maddox’s grandparents) were with us the whole time.

It was the worst thing ever. I remember looking at him in his little gown in his room playing with this little airplane with the nurse and I was begging the doctor, “Can we go home for just one day?  I want one day for him to have a fun day.”  He said, “Ashley, you’re not hearing me.  He is so sick, he will not live another two weeks if we don’t start treatment right now.  He has to start treatment.”

It didn’t even make sense. It was just last week we were on vacation.   I couldn’t stop crying.  I would just cry on his belly, sobbing.  And he would say, “Mom, what’s wrong?”  I would just say, “Mommy’s stomach hurts.”  I didn’t want to scare him.  But the child life specialist (Lindsey) was a huge influence and said that’s the opposite of what you should do.  “He’s very scared, seeing his grandparents crying, his mommy and daddy crying.  We have to explain things to him.”

We just stayed in the pediatric ICU the rest of that day.  It was just devastating.  They scheduled [the spinal tap] for Friday morning.  We’re used to it now, but he’d never been sedated.  So the child life specialist came in and explained to him. “You’re going to be going with these doctors and put to sleep,”  and showed him what a port was and explained that he was going to be getting a port.   She’s amazing.  It was amazing, how much it helped him, but I didn’t think that was going to be the case.  But she knew just how to do it.  The way she explained it, he got it.

They took him back and that’s when she talked to us in detail. She told me to ask Maddox all the time, “Is there anything you want to talk about?”  Always ask so that he doesn’t hold it in.  Early in treatment he said, “Mom, does Jesus ever talk to you? Because he talks to me.”  Our first day home, he said, “What did I do to get cancer?”  I almost broke down and said, “Nothing!  You did nothing.”  And he said, “Well, how come Beckham didn’t get it?”  Two days later Erica, another child specialist, said that with Maddox, he’s so obedient, it’s like you do good, you get good.  You do bad, you get bad.  That’s his whole life, so he’s thinking he did something wrong.  So she talked to him.  “You did nothing.  Some people get sick and we have to help them.”

The hardest thing for me is to not let on that I’m nervous in front of him.  I can tell if I’m nervous it makes him nervous.  Early on we sat down and I said, “I want you to ask me anything you have questions about and I will answer truthfully.”    I think that has been a huge help because no matter what he asks me, he knows I’m going to tell him the truth.  If he says, “Is this going to hurt?”  I say, “Yes, it’s going to hurt but it will be over in two seconds and I’m right here.”

That’s the hardest thing. You can only do so much to help. So much is just out of your control. We are grateful Maddox is doing so well.