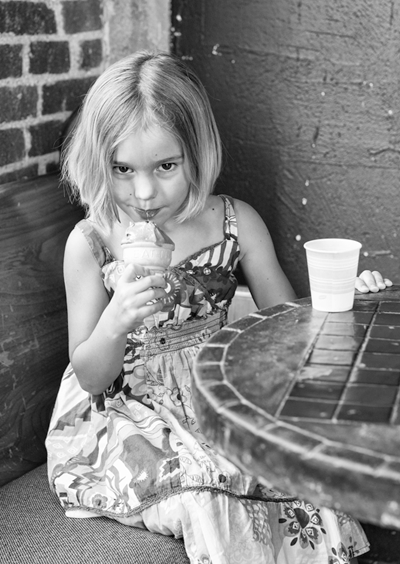 Erin: “Mary Hazel had a radical nephrectomy where the affected kidney, the size of a grapefruit, was removed. The surgeon seemed confident that the operation was the only treatment she would require, other than quarterly scans & lab work for the next 5 years. We were lucky. We got to go home.

“The relief was overwhelming & not to be taken for granted, but another feeling crept in the shadows…Guilt? We got to go home, when so many other kids we met were just starting their treatments – hours of chemotherapy, radiation, multiple surgeries. I remembered the mother I met, whose son was admitted in the room next to ours after his chemo meds made him sick. He was entering his second year of treatment. The mother was exhausted. I felt sheepish when answering her questions about Mary Hazel. Yes, she was lucky her cancer was contained. Yes, she was lucky to be able to go home so quickly. Yes, we surely were thankful & relieved. Sensing my hesitancy to sound outwardly victorious, she held my hand & told me not to feel guilty because my child was a survivor. Because my child gave other parents of newly diagnosed children something vital — hope.”

Mary Hazel: “I don’t really remember too much about [having cancer]. I just know I had a bad ol’ kidney & now it’s gone. I remember Green Monkey having to get all those shots & Band-Aids. But he is pretty brave.”

E: “Green Monkey was her first lovey & goes to all the major checkups with MH. The child life specialists at GHS use him to demonstrate what to expect next. They are amazing.”

MH: “[I remember] Dr. Bryant. She always asks me to tell her a joke. Like, where do dogs park their cars? In the barking lot — get it? Barking lot!

“I remember I always get chocolate chip pancakes at Mary Beth’s when we leave the hospital. One time I wore that purple hat (the clinic) gave me…& then we usually go to Falls Park for an adventure. Sometimes we have ice cream, but sometimes we just feed the ducks or play in the river. I like it when [my mom] twirls me in front of the [TD Stage at The Peace Center] & it makes you all dizzy!

“Can we have an adventure on Friday?”