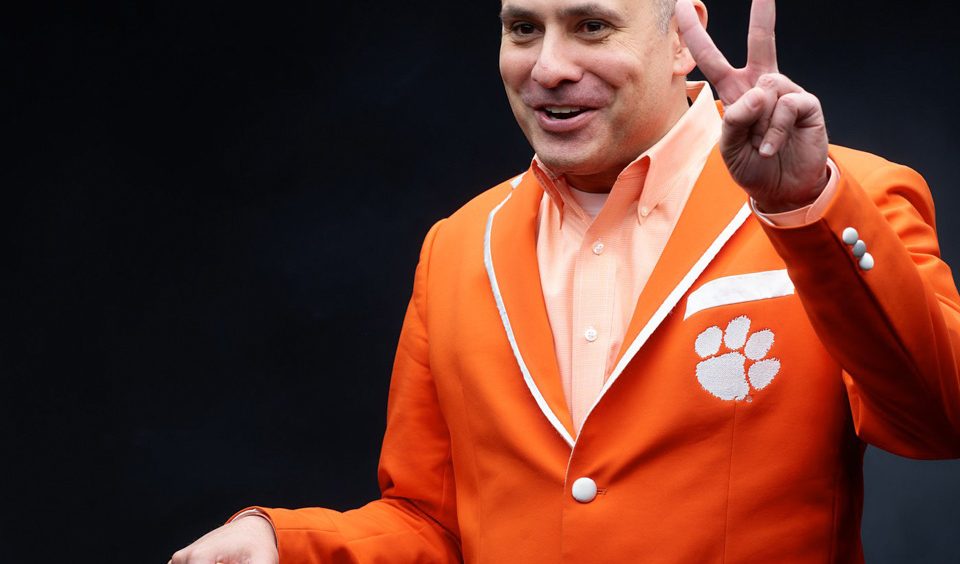 “I have multiple myeloma. It’s in your bone marrow — there is no cure for it. They’re close to it, from what I understand. I’m in remission right now. When I discovered I had cancer, my youngest son was a year old. It was June 26, ‘07, and I was working on the side helping the entertainment team for the Greenville Drive doing mascot stuff. I had the worst leg pain for the longest time — I thought it was sciatica. My leg was starting to give way. I had the pain for just under a year, and it just started getting worse and worse. I just didn’t go to the doctor. I just thought I was getting old, I guess. But on that day, I was on top of the dugout throwing out t-shirts, and went to put a hat on a kids head, when my leg just snapped. I was laying on the 3rd base dugout, and I tapped the woman next to me in the stands and said, ‘Excuse me, ma’am, I think I just broke my leg. Can you help me get someone down here?’

“They rushed me an ambulance and got me out of there. Turned out I had a 4” hole in my femur. It was cancer that was eating away at it. I was in the hospital for 9 days. It was multiple myeloma, which is multiple plasma cystomas throughout your body. They told my family and my ex-wife at the time that I had little time to live. They didn’t tell me — I didn’t know this until after the fact.

“You hit a big depression when you are first diagnosed, but I had a lot of prayers, and a big prayer chain going before the days of Facebook. After that first weekend, the doctor came back and noticed the cancer was in just one area. When I heard that, my attitude changed. I was like, ‘I got this. God is on my side, and I am going to beat this thing.’ And I did. I made it through. I was in remission for quite a long time, and then it reoccurred in 2015.

“At that time, the doctor started talking to me about life expectancy. He said, ‘You have a good 5-10 years, for sure.’ Hearing that is definitely something that wakes you up. I had him repeat it a couple of times. I got very emotional — and I am a pretty positive guy, dealing with my cancer — but I got in the car and balled my eyes out. I had two kids at home. The first thing I’m thinking is, ‘They won’t have a dad. I’ve got to do something.’

When you’re faced with your health, and knowing your boys may not have a father — you’re forced to ask, ‘What is important? Is this? Because I’m not gonna be here in 5-10 years.’ My whole attitude and life has changed. In a sense, I am one of those weird people that’s thankful for my cancer. I am thankful that God chose the right person to let it go through me — because I have used it as a vehicle to help other people.

“I won’t get TOO personal, but at the time, I filed for divorce. I went to work and told them, ‘I’m going to die. We’ve gotta make as much money as we can, so I can take care of my kids.’ I went and I got a second opinion. I saw this new doctor, and he ran a PET scan. We found a little in my back and a little in my shoulder — and we attacked it aggressively. I did some chemo to get in remission, and did a full stem cell replacement. I had my hip replaced after that. I was walking on a cane for the longest time. My work was amazing with me, and took good care of me. I was able to hit my chemo appointments, and they worked with my schedule. And I never skipped a beat — I just kept doing what I had to do. I lived life. I had two kids to raise.

“Now I literally have a whole different immune system. I’m a whole different person — my whole makeup. They take these stem cells out of your bone marrow; you get shots for like a week straight; and it makes all these cells reproduce and push out of your bones — your bones actually hurt for a bit, and the cells get in your bloodstream, and then the doctors collect them (I sat there for 7 hours while they did). The next day, they give you these little stem cells, and they know where to go in your body. They start reproducing this whole new system. So I had to get vaccines and booster shots and all that stuff all over again. I can get new allergies. It’s absolutely crazy!

“When I went to get my hip replaced, it was in bad shape — bone-to-bone. My femur was crushed. I was walking around and working the cane really hard. I went in, and the doctor said, ‘I can get you in the next couple of weeks.’ It was the beginning of the season, but I said, ‘I missed Clemson all last season. We’re going to the National Championship this year, and I’m gonna wait it out.’ He said I was nuts, but we scheduled it for the week after the National Championship. That’s when we won the whole thing. I went to the game, and I took this cane. I had everyone sign it, and then I retired it. But I kinda feel like they did it for me.

“This cane, actually — Dave Fisher made it for me, who used to dress as a clown for the hockey and the baseball games. He whittled this out of wood. It’s opened the door for me to meet a lot of other cancer survivors. I remember meeting a young boy named Beckett Wyatt — he actually died of cancer, but I met him at a Clemson game in a box. He happened to see my cane, and he thought it was cool. At the time, I could tell he had cancer, and we were talking about the Tiger, and I told him I used to be the Tiger. So I showed him this cane, turned it around, and I said, ‘What does this say?’ And he said, ‘It says cancer survivor! You have cancer, too?!’ And I was like, ‘Yeah man, do you? We are like brothers then.’ We ended up becoming real good friends. I am good friends with his dad, Roger, today. I talked to him when we knew it was coming to an end. This cane — and cancer — has opened up a lot of doors.

“As my kids have gotten older, my oldest son, Lance, has come to a couple chemo appointments with me, so he’s been able to kinda see it. My little guy — I don’t think he quite gets it yet. He was telling me Deadpool’s super power is that he has cancer! I don’t know if they understand the full depth of it, but in time, they will. They spoke to my friend Beckett, and they know he lost his life. But with a kid — they gotta maintain positive and normal [states] as much as possible. Their little minds need to focus on themselves — that’s the way I dealt with it. Both of them have straight A’s, and they are good kids. GOOD kids. Future Tiger mascots. They always wanna do push-ups after we score touchdowns.”