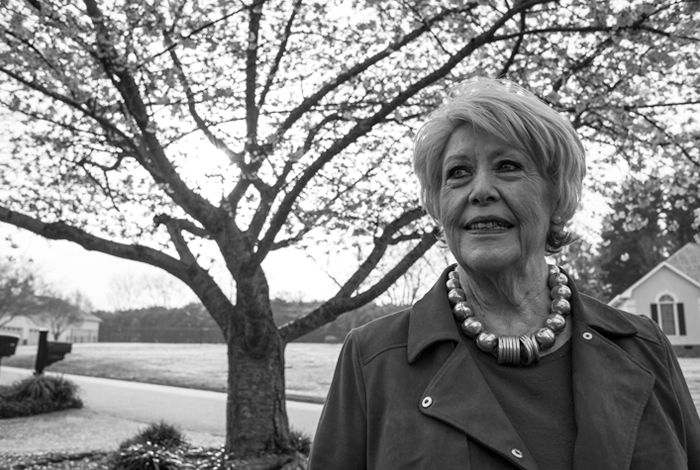 “I’m enjoying retirement, doing great, & then BAM! In January 2011, I have a colonoscopy. I have three polyps & one is malignant. That started my cancer.

“People say, ‘What do you do?’ I say, ‘I do nothing but cancer. I’m just doing cancer.’ That’s what I work at every day.

“You know, it’s funny when people don’t know about getting on & off the chemo & radiation & all of that. They sort of think, ‘Well you have a break,’ & yeah — you have a break…But you know it’s still coming, & it’s like the sooner I can get back on, the sooner I can get off of it. It’s just THAT hanging over you — & you know that you gotta do it, so you just want to go ahead & do it! This is probably how I’ll be for the rest of my life: off & on chemo forever. I mean people live with heart disease, diabetes, & other things…you just have to deal with it.

“The hardest thing for me, because I’ve always been a person of my word, is to commit to something & not be able to do it. That breaks my heart, & I’ve just gotten to where I try not to commit to too many things. I realized that I’m just committed to fewer & fewer things, because it breaks my heart to back out on someone.

“I wished I could have journaled every day throughout this whole process, but I got to the point that every day that I was writing, I was consumed with the cancer. The journaling made the cancer much more a part of me than what I wanted, so I just quit writing it.

“One of the first big things I was involved with was when Greenville High & J.L. Mann did their Spirit Week: when we went over there & went out on the field in our colors, & I was in my blue for colorectal cancer, & we all went down on the field to get the check. It was something ELSE to go out there & get that check, & to see all of those young people who had raised money for the Park!

“You are a Survivor, regardless of your state of cancer: cured, remission, cancer free, going through treatment — if you are still living, then you are a Survivor. It’s a hard concept to get my head around. I’d rather be a Survivor without it being a part of me currently, but it’s not realistic to say that I can’t be a Survivor until I’ve beaten this thing. I may never beat it, but I’ll always be a Survivor.

“I have cancer, but I don’t want cancer to define me. It’s not who I am. It’s a disease that I have. I try to put that on the backburner. I try not to make a big deal about it. I certainly don’t mind talking about cancer, though. I want people to pray for me! I have people continuing to pray for me, & I know that’s why I’m able to do things as well as I can.”