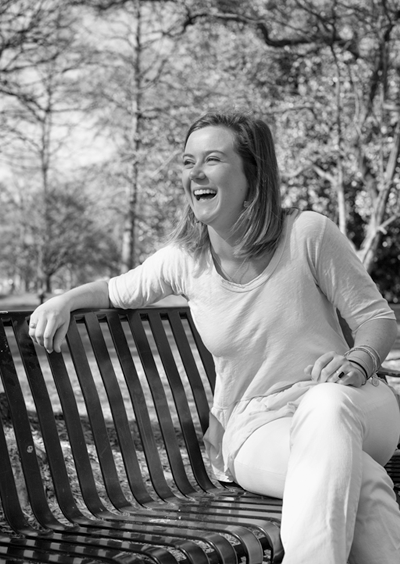 “It was not until after the surgery that we learned it was ovarian cancer. The doctors were fairly certain that it was a malignant tumor, but ovarian cysts run in my family, & the ultrasounds weren’t able to give us much information other than there was a mass in my stomach. Halfway through the surgery, the doctor asked to speak with my parents. They had to make the decision whether or not to leave my right ovary, which the cancer had already spread to — something we had not expected. I am very thankful that they made the decision to leave [it], giving me a chance to one day, have a family.

“Being a survivor is someone who is able to tell a story after facing adversity with grace. Not only those who experience cancer firsthand, but I also believe that family & friends share in this survivorship.

“When I was diagnosed, I looked for books on how to cope with ovarian cancer at a young age, & there were none. So, I decided to begin writing my own book, which I hope to have finished soon. This will serve as a guidebook for other young women diagnosed with ovarian cancer, & will touch on everything from being a teenager & losing your hair, to coping with life after cancer. I think it’s very important to focus on living your life after treatment, because that’s the goal, to survive and beat cancer & continue living life.

“The title of the book is Nattitude, which is a term that was coined by my boyfriend, Ragland Coxe, & his family. ‘Nattitude’ was the attitude that carried me through treatment, & what helped me focus on the positives in life rather than cancer as a disease. I have always seen my diagnosis as a gift, as strange as that may seem to some people. Having cancer has given me the opportunity to speak & share my story with many people — & show how even when you are dealt bad cards in life, you have the opportunity to play them in a way that benefits you.”