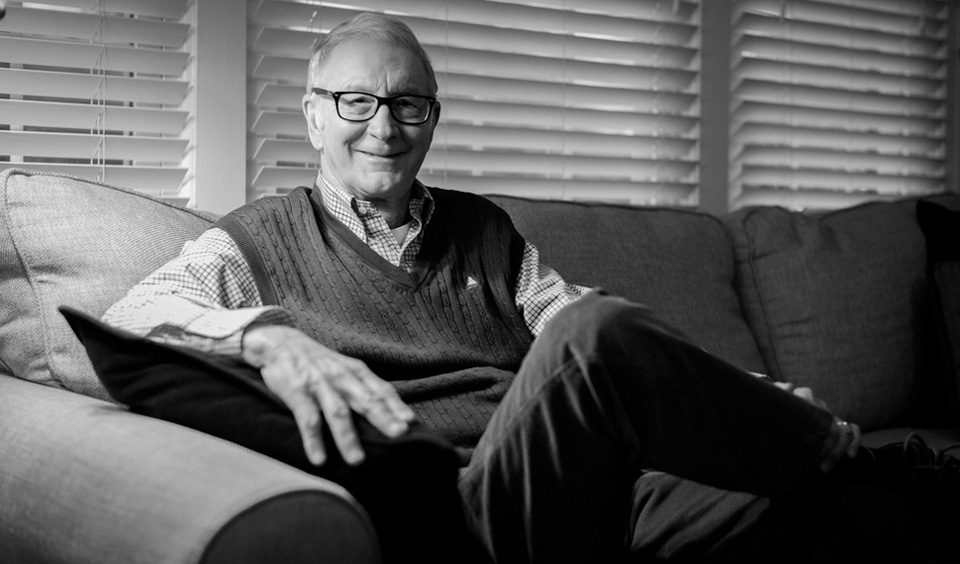 “I was diagnosed [with Stage III colon cancer] in January. They actually removed 12 inches of my colon, and they took out 20 lymphnodes and found one [that tested positive]. That bought me the chemo, unfortunately, so I joined that society. I started treatment April 10.

“But after 6 months, I did a CT scan, which showed [the cancer] hasn’t grown anymore, which is great! On Nov. 13, I had a surgery laparoscopically to remove a hernia, and I said, ‘Well while we’re doing that, can we just take my port out?’ So they did! I still have some pain and some neuropathy from my immunotherapy treatments, but that’s my journey now. They’re monitoring me, and I have to go back in 3 months.

“During this journey, I was a caregiver — along with my sister-in-law — of my brother, Alan. His wife allowed me in that sacred place with him. He was 9 years younger. I held him when he was born, and rocked him to sleep. I was holding his hand 65 years later when he took his last breath, and his wife was there on the other side of him. We are very close. That’s the circle of life.

“Wasn’t my mother blessed, with four ‘laidback’ boys? [Laughs.] We all thought we would die young from heart attacks. That’s what our uncle died from, and our dad died at 57. It was ironic that Alan was diagnosed Nov. 13, 2016 with [brain cancer]. I was diagnosed a year and a month after he was, and on Nov. 13 of this year — 2 years to the day — is when they did my [most recent] surgery. I was thinking, ‘Do I want to go on the 13th?’ But I went, and decided I wasn’t going to be superstitious. I’m still sore from that, and will be for a while, but I’m doing great.

“With my brother, he just stopped breathing. It was a smooth transition from one life to another. When I cared for him, he wanted me to shower him and all, and we would laugh, because we grew up 4 boys without any money on a small farm — and we would use the same water anyway, especially when it was a cold day! We found a way to have fun. You have to laugh. You have to have a sense of humor. But sometimes it just stinks all the way to Georgia.

“I retired from the hospital in 2010. To be a chaplain, you do a year of clinical pastoral education. It’s kind of like bootcamp for the mind! It’s a clinical practice in the hospital, and you make your rounds like doctors do. I’ve spent a lot of time with pediatric doctors. We’ve had a lot of conversations. They would say, ‘You know, you seem to handle death so well.’ I would say, ‘Well what happens is that as a doctor, you’re doing everything you can do to keep someone alive. So when a person doesn’t make it, you consider yourself a failure; but if you do that every time, you’re going to be beating up on yourself a lot. As a chaplain, we see that every thing as a living organism is going to experience death; so we should see death as a stage of life.’

“Unfortunately, what’s happened is that we’ve demonized death — with the devil and his pitchfork, and our talk about ghosts and skeletons and all. So we’ve really done society a disservice with demonizing death, and making it seem like such a bad thing. I’m not afraid of death. I’m not ready to hop on the next train, but when I was diagnosed, I knew the reality of it. I’ve seen plenty of people die. I’ve done a lot of funerals, but I’ve gone to a lot of high school graduations for those who did well, too. All the time, I go out to eat and someone will come up and say, ‘Do you remember me? I was 5 years old…’ That happened to me today in the elevator!

“Even the word we use in the Christian faith — ‘salvation’ — it’s in the continuous. We are BEING saved, is really what the translation of the word says. It’s not something you do, and then it’s over with. It’s a process. Life is a process. Understanding it is a process. When we are able to honor other beliefs, it is a process.

“Chaplains can do that. That’s why we are chaplains, and our goal isn’t to make someone believe like we do. If my faith is so threatened that everyone has to believe like me, because I have the corner on all the faith, then what about all these other people that haven’t been exposed to my faith? Does that make them doomed?

“I don’t see science and religion in conflict, either. I’ve never been frightened by science. When I was in seminary, I had a cousin — a very brilliant scientist — ask me, ‘How would you handle it if you found out there was life on another planet?’ You know, because we hear that Jesus came to THIS planet and so forth. I asked how he’d feel, and he said, ‘It would just validate my view of God! That God is omnipresent everywhere, and not limited!’

“We have limited Him to a small planet. But God is not limited. Just our views, understanding, and our love of God are limited.

“If you are a follower of Christ, you knock. You don’t knock the door down. You knock and you enter. I don’t have a problem honoring those with no faith, either. They are deserving of my care. Maybe along the way, they will see what keeps me buoyant. But when I enter a patient’s room, I knock; because when I enter their room, I enter their house. It’s a sacred and holy place. That’s where they have to live. And along the way, I love what I’ve learned.”