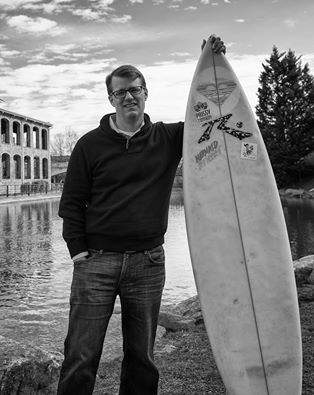 “I was diagnosed officially & started treatment in February of ’06, & when I see Dr. [Larry] Gluck now, he says that is ‘my date.’ I just passed [10 years], literally now! But I had tumors in the lower & upper quadrants of my body, & I had evidence of cancer in my bone marrow. The good news is, I’ve heard once you’ve reached 10 years you can go back to some sort of a normalcy. By no means am I getting yearly PET scans or CT scans anymore, but on the frontend, I was doing that really frequently, because that’s usually when [non-Hodgkin’s Lymphoma] pops back up – & then you have to do other things. I’ve actually had friends that I’ve known that have had to do multiple other types of treatments to get it to go away.

“Life is good. My doctors were, at first, saying that ‘This is a good one to get,’ & of course my mind is like, ‘There is no such thing – a good cancer to get?’ But you know, I sat back & had an epiphany & said, ‘Well, I was dealt a crappy card in life. I could sit back & cry about it & be negative, or I can just do what I need to do. I have other things I need to be doing. I have two young children.’ I never really sweated it. I truthfully didn’t.

“I had 6 rounds of chemo. I never got sick. I missed 3-4 days of work. Funny enough, I gained a ton of weight because of the steroids. I gained 20-40 lbs., but I’ve lost it. It’s amazing how much chemo takes out of you. I remember doing simple things such as going up & down stairs. I mean at 35, you’re young…I’m cutting grass, picking up my kids, doing things I needed to do – & all of a sudden after 2 treatments of chemo – yeah, I was bald, but I felt like I was hung over most of the time. It wasn’t like I was dying, but I would go up a flight of a stairs, & I was huffing & puffing. It was like we were in the Andes Mountains or something.

“My funny story with the kids…they were too young to know. My 5-year old at the time knew daddy was taking medicine that would make his hair fall out. Other than that, there was never any thought in her mind anything was really wrong. She was a kindergartener, so we never got to that level. But I always wanted to have a Mohawk, & so my wife videotaped it & my girls, my wife & I shaved a Mohawk. I had longer hair, & I spiked it out, & we shaved the sides. Right on the 19th day, your hair will literally fall out in clumps, & so knowing that I was like, ‘The hell with this – I am going to shave a Mohawk.’ So I did! I walked around town, went to the mall. I was in khakis & a dress shirt with a full Mohawk. I looked like a punk rocker from the ‘80s –just to thumb my nose at the fact that, ‘Yeah, I have to deal with this, but I am not going to be sad about it.’ My wife & kids were instrumental – I mean, we had fun.

“It’s funny – that surfboard [in my picture] is my old one from college that has seen some fun days. Now my oldest daughter Pearson uses it. Hopefully we will get Holland to start using it. But yeah, my oldest daughter has surfed on it now, so there are stickers on it that are girl oriented, which makes me laugh. It’s fun to pass that down.