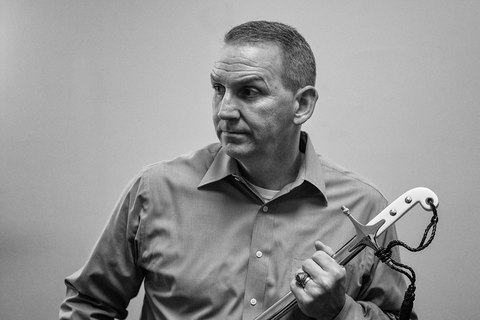 Veterans Day may have been exactly one week ago, but particularly in light of the past week’s events, it’s never been more apparent how we need to revere these survivors every week, every day. So meet Ron. He’s endured some major deployments — & cancer, too.

“I loved [my time in the military]. Serving your country has a lot of privileges, & it has consequences. But the biggest thing I loved about it was being able to go places & realizing what we have here.

“I was deployed to Iraq in 2003. While I was there, I was diagnosed with Non-Hodgkin’s lymphoma. My cancer — they declared it as being a service-connected disability.

“We were exposed to some levels of nerve agent in the Gulf War. Depending on who you were, where you were, & for how long, really depended how long you got hit. The army units carted all these ‘weapons of mass destruction’ from all over the country into Khamisiya, Iraq. When you destroy a nerve agent, it’s supposed to be incinerated at 2500 degrees in a scrubber, so basically nothing escapes. Well obviously they didn’t have that. They just built these huge open-air pits, & they made them hot as Nebuchadnezzar’s furnace & thought, ‘Well, this will take care of it.’ So they burned tons of nerve agent for days & days…if you look up ‘Khamisiya plume,’ you can see where it was by day & by concentration. Yes, unfortunately, I was right underneath it for quite a period of time; which would explain why all the British gas alarms would go off 2-3 times a day. Nobody was dying or shaking, so we just assumed it was the oil smoke. But as time goes on, there are some people who have issues with some of the symptoms from the nerve agent.

“What I have is a compromised immune system, & also a dysfunctional autonomic nervous system. [So the cancer] was just one of those things that [would most likely emerge] some place, some time. It ended up happening in 2003 under a lot of stress…my immune system gave up.

“Long story short, [I went from Kuwait City to Germany for a biopsy], & my wife flies in from the States. She was only the 4th Marine wife to fly into Germany – & the rest were dying. So [the doctor] cracks my ribs, splayed me open, takes out a softball sized mass, sews me back up, & 14 hours later I am on a plane back to the States. So I flew back to Camp Pendleton [in California]…It was a really aggressive form of lymphoma.

“I brought my family with me to CA. But it was August, & I wanted my kids to be off doing their stuff. [So I asked to return home to Greenville], & we got to go to Greenville Cancer Center. The really cool thing is that before we left, my oncologist said, ‘I am so excited for you.’ I said, ‘Why is that?’ He said, ‘Well, you go to Greenville, & you’re going to get an experimental immunotherapy drug that is rock star solid. When you go into remission, it’s because of THAT drug. In the military system, if it’s not FDA approved, you couldn’t use it. We couldn’t have gotten it here. You’re going to be fine.’

“The cancer went away & never came back.”