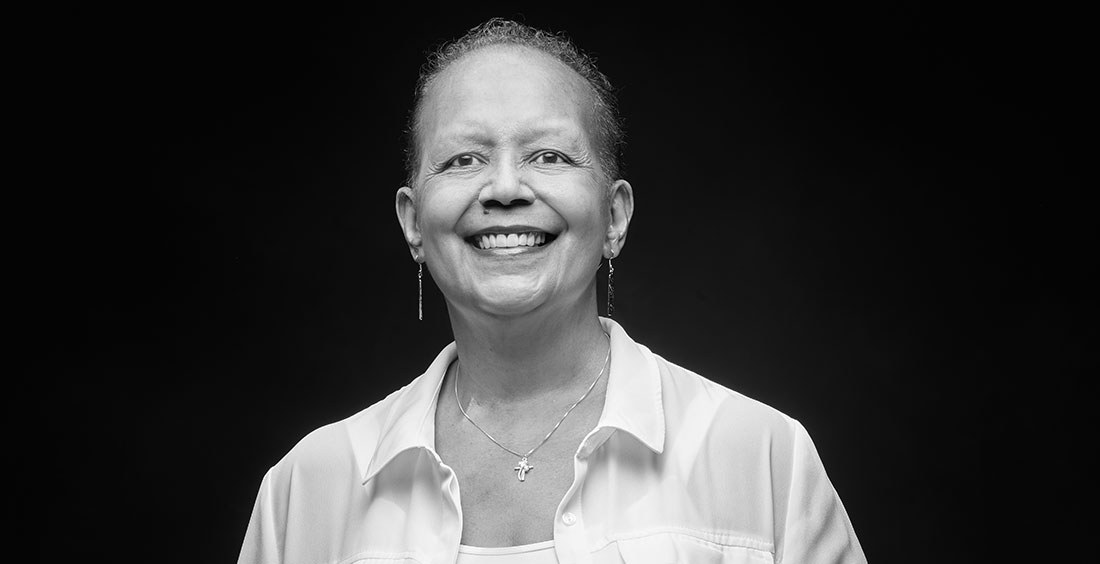 “For me this process has been a series of miracles.”

“I was diagnosed with invasive ductal carcinoma.   The official diagnosis came April 6th 2015.”

“At the time both of my children were getting ready to experience what I call major milestones.  One was graduating with an undergrad and the other from grad school.”

“I couldn’t think of what to give them for a graduation gift, so we thought the gift of time together – a vacation together would be good – so I was actually searching for the perfect vacation on my iPad and I decided I was going to sit down.  When I reached over for something on the counter, the edge of the open iPad and my body weight, hit in the right spot and I felt a little lump that I had not felt before.”  Even though I didn’t know it at the time, that little lump was going to change my life in ways I could not imagine.

“I called my internist on Tuesday morning.  She did the exam and said I don’t think it is cancer, I think its just an infected gland, but we’re going to schedule an ultrasound and another mammogram anyway.”  Miracle #1.

“I had just had a clean mammogram 7 weeks before. I went the next day, had the ultrasound and the mammogram and the radiologist saying the same thing, I don’t know what it is but it’s not cancer.  It’s most likely an infected gland.” He told me to keep an eye on things and if nothing changed, we’d schedule to do another mammogram in 3 months.

“By the time the weekend rolled around, I thought, if this is just an infected gland, then someone should just write me a prescription for an antibiotic.   So, I decided I was going to call on Monday and get a prescription. The radiologist called me.  He said, ‘I went back, and reviewed your previous scans and I’ve been fighting with myself and wondering if I told you to do the right thing by waiting 3 months. I‘ve decided I don’t have to fight with myself, I could just call you and tell you I want you to have a biopsy and to have it immediately.”  Miracle #2.

I had the biopsy and the results came back positive. I would need surgery and radiation. ASAP

“One of the things I needed to do prior to surgery was an MRI and I am extremely claustrophobic, so I tried to figure out all sorts of ways around getting one. The answer was Xanax. The day before the MRI, I was in the grocery store and this man just kind of caught my eye. He was wearing dirty overalls; his hair was long and greasy, and he was wearing a baseball cap.  He looked kind of scary. He was saying to one of the cashiers, ‘you have to reprogram your mind.  You have to put in what you want.’  I hurried past them but then when I got to my car, it hit me.  I was like, ‘God, are you talking to me with this whole reprogram your mind thing.’  I was overwhelmed with thoughts and emotions. I waited for that man to come out of the store. I’m not sure why nor what I was going to say when he came out but, after about 15 minutes and no sign of him, I left. The next day, I had the MRI and much to my surprise I didn’t have a heart attack and die. Xanax really does work.”

“I had 2 surgeries, 8 rounds of chemotherapy and 33 rounds of radiation and my body declared NED, no evidence of disease.”  Between surgeries, I happened to stumble across the last 5 minutes of a Joel Osteen sermon entitle “Reprogram Your Mind”, message # 622.  Remember the man in grocery store?  Miracle #3.  Angles don’t always appear in white robes with wings.

“I had my last treatment in December of 2015 and things were going along well until August of 2019.”

“My oncologist had been doing a CA 15 -3 test as part of my regular bloodwork.  The CA 15-3 is what’s know as a tumor marker and mine had started to rise.  So, because it was rising, we weren’t going to wait 6 months to re-check but rather we’d check again in August.  In August, the news was not so good – the cancer had come back and this time, it was metastatic. I had a bronchoscopy in September and started treatments, targeted infusion therapy every 3 weeks for the rest of my life.

Things changed again this past January.  What I’d thought was a pulled muscle in my neck landed me in the ER where they determined that I had a crack in my neck and the reason for it was because the cancer was now there too.

“Up until that point, I’d never had a why me moment.  I’d never said, ‘why me.’  The closest I’d ever come to saying it was that Saturday in January.  That moment, January 25th, was the absolute lowest moment of this journey.”  I remember crying out right there in the ER.  I said, ‘I don’t understand.’   I’d never prayed, ‘Lord don’t let me have cancer.’  My prayer was always Lord, just don’t leave me.   Whatever this is, if You don’t leave me, I’ve got this.  I can handle this.  You just can’t leave me.”

I even figured out a way handle all my hair falling out. Suddenly having no hair can be a big deal. “I remember back in 2015, when the doctor told me the chemo was probably going to cause me to lose my hair, at first I was in denial.  I was determined that I was not going to lose my hair.  But when it did start to fall out, I decided that if I couldn’t stop it from coming out, the least I could do was control when it all fell out.  So, I decided to get my head shaved.  I knew wigs were not an option, hats made my head sweat and I didn’t know how t tie a scarf, so I was just going to rock bald.”

My daughter happened to be home from college that weekend and I remember saying to her, “we’re going to the hair salon tomorrow at 8 and I’m going to get my head shaved. She told me later just how unsure she was at the time that I knew what I was planning to do. It was only after we left the salon and we were out shopping and she saw me walking around so comfortably with my newly shaven head that she was able to take a breath and know that I was really good with being bald.

I mentioned earlier that my journey has been one of miracles.  I told you about a few of them, believe me, there is more to tell but instead I leave you with this thought. “In the end we all die, but you have 2 choices – live your best life until then or worry yourself about things you cannot control.  The only thing I can control is my attitude, I can control that, and that attitude feeds my determination to live.”

“I’ve always thought of myself as a conqueror and not a survivor.  I didn’t survive anything, I conquered it. In fact, I am more than a conqueror and that’s how I’ll live my life every day until it’s done.”