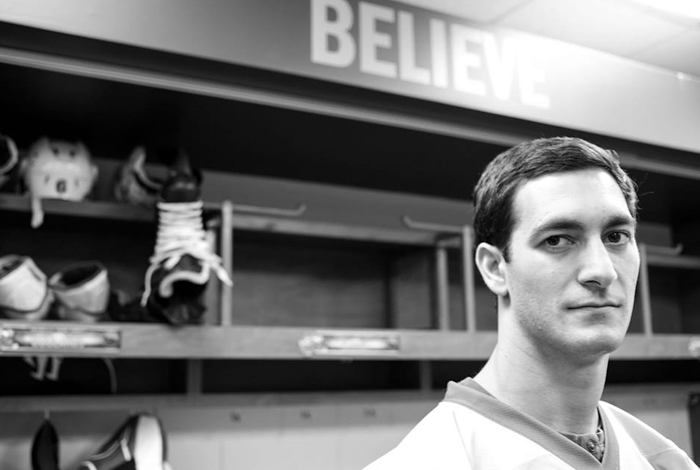 “The cancer happened during my sophomore year [at Colgate]. It was Stage IIA Hodgkins Lymphoma. Then when I broke my ankle as a senior two seasons later, it was really a tough pill to swallow. I think it set me back in my career aspirations a little bit; the opportunities I think I would’ve gotten, had I stayed healthy. Had I been able to showcase myself a bit more, it might’ve set me up a little better. I always wanted to play hockey professionally.

“The cancer was like a watermelon, apparently, in my chest. I think [the mass] was about 12” x 4”. I didn’t feel any symptoms, which is why we found it when we did, at a physical at home in Montreal. There was just shortness of breath — but it wasn’t that alarming, like something was wrong — it was just kind of like, ‘Well I’m not in as good of shape as I should be’ or whatever. But looking back, yeah. My breathing was off.

“At the time, my sister Constance, who is 6 years older, came to visit me at school. We are very close. We went to grab coffee, & she was basically like, ‘Look, I’m not going to sugarcoat this for you. You have cancer.’ I mean, I knew there was an issue. I didn’t know exactly what it was, but she confirmed it — what was to come. She was just practical, like, ‘There’s a 95 percent chance that it’s this.’

“The hardest part of being diagnosed was thinking, ‘I have to put my life on hold for 6 months.’ Not being a part of the hockey team, or the Colgate community especially, for 6 months. Especially that senior class — not getting to hang out with them, & play hockey with them, & strengthen those bonds. So originally to think I wasn’t going to get to experience all that — LIVE all that — I wasn’t as concerned with the chemo. It was the FOMO: the fear of missing out on your life. I was really close with that group in particular.

“When I broke the news to the team, it was a shock to everyone. You don’t really expect to hear that from one of your teammates & friends, especially at that age, so they were all shocked. There were a few tears. When I broke the news, I was like, ‘I’m done for the year, & I’ll see you when I see you.’ They were all extremely supportive, but it was unchartered territory for everyone.

“I did 12 chemo sessions back home in Montreal — every 2 weeks for 6 months. The first one I did was during winter break, so we were out of school. After that I said, ‘OK, I took that pretty well. If i can continue to feel this way, I might as well try & continue with academics. If I can play hockey, all the better.’ The doctors were all OK with that, seeing how I responded to the first treatment. I dropped a class, but I took 3 others, & I got to play hockey. I just missed every second weekend, because I had to go home & do a treatment; I missed a few classes as well. That went on for a semester.

“I think everyone expects me to say that year with the chemo was the hardest, but to be honest, I think it was breaking my ankle at the end of the year my senior season. Missing out on going to the tournament for a second time…We had a really good team, & injuries cost us a shot at the National Championship. As soon as I was able to put on a skate that year, I was like, ‘Hey, I am ready to play!’ I knew it was my last kick at the can in college.

“But the chemo also took me longer to recover from than even I expected. Going through my junior year, they would give me a day off in the middle of the week to get extra rest. My energy levels weren’t quite there, especially with going to class & practice. Gradually I got in better shape, but not close to the shape I was in prior to being diagnosed. Then senior year, I felt way better than before; I had gone through a healthy, full summer of training. Then after another full summer of training, going into my first pro season, I felt the best I had in 3 years…It really takes a while to flush that stuff out of your system. Nobody really knows how long.

“So then last year, I signed with Rochester in the AHL on a 2-way contract, but ended up playing most of my year in the ECHL, which is equivalent to the Swamp Rabbits. This year I thought it would be a good idea again to sign another 2-way contract with a different organization, so I did that. So far I have been down here [with the SR] the whole year, which is kind of frustrating. I think I deserve an opportunity at the next level, & I think a lot of people would agree with that…but, I mean, it’s the nature of the business. It is what it is.

“My dad has this way of firing me up. For example, when we’d be in the hospital, he would say things like, ‘Your situation isn’t so bad, see? You could be that kid with one leg. You could be that guy with the oxygen tank.’ Which I guess is a weird way to talk to a cancer patient, but it gives you perspective. Like, ‘Look, Spiro, you still have a fighting chance.’”