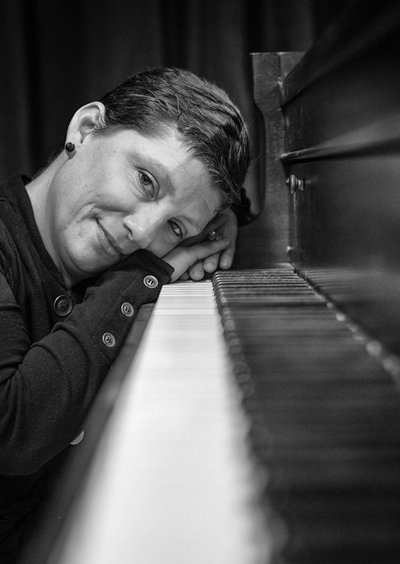 “When I was 19, I was diagnosed with osteosarcoma. At the time when all that happened, I was like, ‘OK, let’s just do this & get it over with.’ I knew what cancer meant, but at the time, my attitude was, ‘Well, I’m going to be OK.’ I think maybe there was one instance where it crossed my mind I could have a bad outcome, but it never really occurred to me until later, when I got older & I kind of realized what happened. I wouldn’t say it was necessarily automatic pilot, but I was like, ‘OK, let’s do the chemo, let’s do the surgery, & let’s get on with life.’

“Then 20 years later — last December — I was diagnosed with breast cancer. I’ve already had reconstructive surgery. I am almost done with what is technically a chemo, but it’s more of an antibody – that I’ve had to do for a year. I’ve already done all the bad, ugly chemo that makes you sick & you lose all your hair – I finished that in May. This other treatment I do every 3 weeks, & I have 2 left, & I will be done…

“The first time, I had other people worrying for me. Now I have a son, a husband — other balls in the air that you’re thinking about… You want to make sure you get better so you can be there for them.

“Obviously the second time, you know a lot more. You could probably throw a rock outside your door & hit someone that has cancer, or has a friend or a family member with it. Maybe when I was younger, I just wasn’t aware about what all could possibly happen. I am sure I was stressed, but as far as the fear factor – I just didn’t think in those terms when I was younger.

“I remember the first thing my orthopedic doctor said to me was, ‘I am going to save your life, & then I am going to save your arm.’ He just had such confidence; I just trusted him totally. Plus, I was a teenager, so I didn’t know not to trust him as well. I think as you get older, you just don’t trust people as much, & you question things more.

“I haven’t ever been [like], ‘Why me…’ With the breast cancer, it was scary, & initially I was like, ‘Am I going to be one of the people that doesn’t have a good outcome?’ But after the PET scan was clear — after that moment, I just felt really blessed that whatever told me to go to the doctor (well, God) — I just felt really fortunate, & like I had protection. The two cancers are not linked…It’s just one of those things — just for whatever reason, I just ended up getting two types of cancer. Obviously I felt frustrated & scared & all that. But I just feel protected & blessed that I have done so well, because overall, I have.”