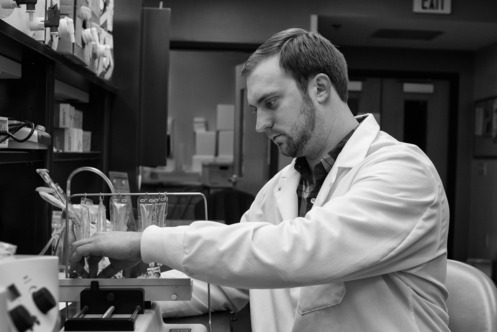 “After my surgery, I missed two days after spring break, & then I was back in school. Then I had chemotherapy in the summer after school ended. I had about 3 1/2 cycles. I had to stop because I got MERSA from one of my ports, so I was hospitalized for that & had to stop. I had IV antibiotics for a while until that was cleared up. Then I restarted again, but I developed an allergy to the antibiotic they were using — so I was hospitalized again for that. Each [hospitalization] was about a week. So it took a little time, but I’m cleared. I’ve been good.

“A lot of what we do [at Kiyatec] is trying to model cancer as best we can so we can test it as much as possible. So we can use people’s actual samples to do a bunch of different tests, or we can use cell lines that can mimic everything. We try to make the environment as much like it is in the body as possible, so we can have the most accurate testing of drugs & stuff. Most of the drugs we test are FDA-approved for the specific type of cancers we test.

“The main goal is to give information back to the doctor that can help the patient. I was sort of on that [career] path already [before I had cancer]. I’ve always been a math & science & biology person. But it makes me appreciate what these people are going through — even though I don’t know them personally. We don’t know the patients we work with; it’s a double blind study.