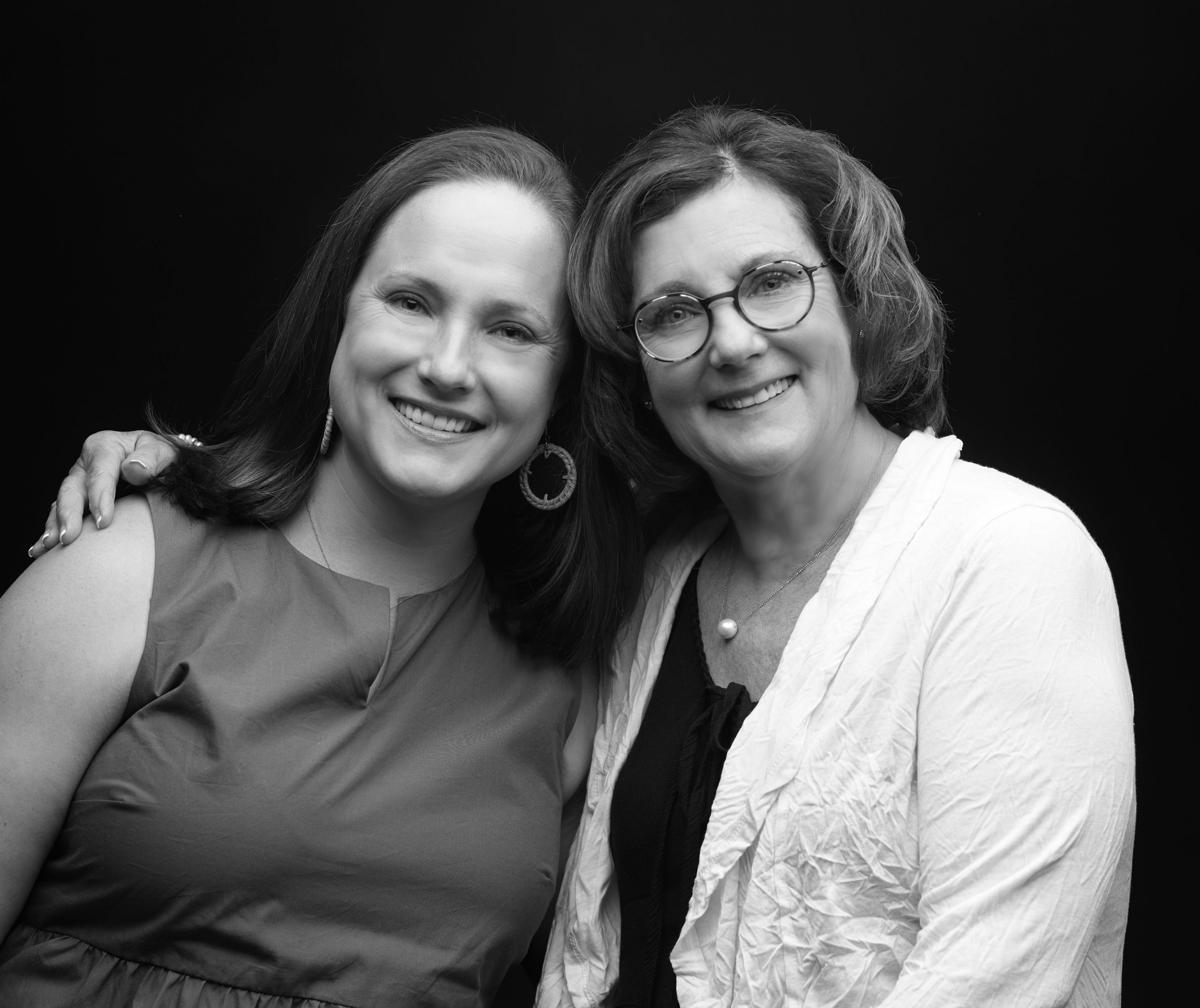 “Mothers and daughters together are a powerful force to be reckoned with.” -Melia Keeton-Digby

“It’s Cancer.” The words smash into life plans and send dreams and hopes scattered and reeling. Receiving that diagnosis for yourself is beyond devastating. However, hearing the news about someone close to you is arguably just as heartrending, if not more so. Vaughan Overman and Nancy Touhill are a mother and daughter who have had to walk both sides of that experience and have learned about the differences journeys can have, the value of a support system, and the best way to show love and support to those walking a similar journey.

Nancy, a Director of Meetings and Events for a trade association based in the D.C. area, was the first to be diagnosed with triple negative breast cancer in February of 2015. She found a lump and set up an appointment to have it examined via ultrasound. From the second the surgeon started measuring and taking notes during the appointment, Nancy knew that it was different than other appointments she had had in the past. A biopsy was performed right away, and Nancy received the hard diagnosis two days later.

Nancy’s memories surrounding that time are still clear in her mind. She remembers trying to collect herself after the biopsy appointment on the way to pick up her three-year-old child from daycare. She was looking everywhere for a sign of hope as she drove. But the day was cloudy, mirroring the fog and grey of her emotions and whirling thoughts. And then – there it was. A beautiful sliver of a rainbow peeking out from behind the clouds. A sign of hope amidst the storm. It was the symbol that started Nancy’s habit of looking for many such signs throughout the long journey ahead.

She remembers the anxiety and mental struggle while waiting for the phone call with the results. She recalls falling down an internet rabbit hole as she tried to educate herself and regain some feeling of control.

Vaughan, of course, was immediately devastated by Nancy’s news. Her first reaction was to ask, “Why isn’t it me? I’m older, I could handle this, and Nancy has a three-year-old child!”  She felt helpless; especially as Nancy and her family were not living in the same city at the time. And despite Nancy’s independence (which she may have inherited from her mother!), Vaughan did travel to be with her and go to her initial doctors’ appointments and some of her treatments.

With triple negative breast cancer, there is a 5-year milestone to push for. If you can survive 5 years, your chances get much better at surviving overall. And Nancy hit that amazing milestone in February of 2020! Unfortunately, the year 2020 also held some more news for their family.

In August of 2020, Vaughan, a principal at Monarch Elementary School, had a finding in a routine mammogram which led to her own diagnosis of estrogen/progesterone positive mixed ductal and lobular breast cancer. Vaughan shared that by that point, she almost expected to receive that news. Her own mother had breast cancer, and after Nancy’s diagnosis, she felt it was only a matter of time. In fact, when the doctor walked into the room to discuss the results, Vaughan said, “I have breast cancer, don’t I?” Despite that expectation, Vaughan certainly felt a daze overpowering the time after her diagnosis. She remembers the difficulty of telling her friends and colleagues, and how their emotional response was sometimes so strong she had to comfort them instead of the reverse.

After Vaughan’s diagnosis, it was Nancy’s turn to jump in and attend doctor appointments, pour herself into research, and be a second pair of eyes and ears as they navigated this path together. “You never want someone you love to go through something so difficult,” says Nancy. “And I think it was even harder because I knew what could be as part of that; what surgery and treatment could look like.”

“Nancy knew everything. She knew exactly what every doctor meant. With COVID they wouldn’t let her go to the doctor appointments so she was on speaker phone the entire time, asking questions. She was my rock,” said Vaughan.

One thing that immediately stood out to both Nancy and Vaughan was how different their experiences were, despite some surface similarities. From age at diagnosis, to stage, to type of breast cancer, to response to surgery, chemo, and radiation, to anticipated chance at survival, Nancy and Vaughan both faced incredibly different paths. Vaughan emphasized that she learned how important it was to hear others’ stories and not try to fit them into the box of your own experience. “Every cancer is so different. What is true for one is not true for another. People’s paths are not the same. Just because someone you know had a certain experience does not mean that will apply to another person. Stay compassionate and be careful about how you share stories of other experiences in your circle.”

Vaughan, for example, was incredibly positive from the moment of her diagnosis. She used positivity almost as a shield against all the news, treatments, and process. Nancy, on the other hand, hated people telling her to be positive! “It’s okay to not be positive, strong, and upbeat all the time. Coping mechanisms are different for everyone,” she shared. “This will bring anybody to his/her knees, and it’s okay to let that wave wash over you and then dig deep to deal with it. And coping mechanisms are different for everyone. Be yourself, and cope with the grief however see fit and however is best for you.”

Part of the uniqueness of Nancy and Vaughan’s story is that they were able to both give and receive support in a way that not many do. And they walked away with very specific learnings on how to best be there for others going through similar circumstances. Nancy says that “Cancer changes everything. You realize the strength that you have, and how much you do depend on other people. I am super independent, but I joke and say that when I was first diagnosed, I would talk to anyone who would listen long enough so I could collect information and find a support system. But it also gives you a new level of sympathy and empathy for others who are going through a dark place. You learn how to talk to people when they go through something challenging or tragic in life. The biggest lesson I learned in all this is how to be a better support system; both in what to do and what not to do.”

To be a good support system, Nancy says that people should “Listen. Don’t talk when someone else shares. Don’t tell them how to feel, or what they should, or should not be doing. Just be there and listen. And never begin any attempt at an empathetic response with the words, ‘at least.’” Both Nancy and Vaughan agree that it is best to push past empty promises of help. “Pick something, and then do it,” says Nancy. Vaughan adds that you should not “give them the option of saying no, thank you. Just do some things.” It can be overwhelming or awkward for the person you are trying to help to process something that would be helpful and delegate that. Take the pressure off them by just showing up and dropping off dinner, taking them out to get their nails done, doing their laundry, etc. and just make the help happen.

For Vaughan, Nancy was a tremendous support system. And Nancy shared that one of the people that had an impact on her overall outlook was a woman who had also survived triple-negative cancer. She served as Nancy’s beacon; Nancy felt like she could talk to her about anything, and that she could look to her for inspiration and perspective. And of course, her mother was a cornerstone in her support system. It was such a gift,” Nancy said. Vaughan agrees. “I could ask Nancy things and I knew she would be very honest with me and just say what was going to happen.” Nancy recalls the 6 hours of chemo treatments where she and her mother could sit together, and talk about the hard things, or just sit in quiet companionship. “There were moments of time that we wouldn’t have otherwise had.”

Advice for the future

For those diagnosed with cancer themselves, Nancy recommends that you “advocate for yourself. Stand up for what you think you need. Your doctors are only human and are only working with the best information they have. If something feels off, fight for a solution.” Nancy herself researched extensively and asked for an additional kind of chemo that she thought would help and credits a portion of her success so far on speaking up when she saw a potential solution. “Your life is worth digging in and fighting for what you need.”

Vaughan mentions that staying busy is a life saver, and her positivity was again a shield and comfort as she processed through the daze and shock of the initial news and following process.

Both are strong advocates of seeking the professional help you need; whether that is pursuing a specific physician that you feel comfortable with and trust, or seeking out objective, professional help to support you in processing the emotional weight and trauma of the survivorship journey.

“Realize your own strength, and what your body is capable of doing and going through.” Nancy says. And as you need it, “let others sit with you and be quiet with you.”

And for those who are loving someone walking the cancer path, Vaughan and Nancy recognize how valuable those caregivers are. Even strangers can play a crucial role in the process. Vaughan and Nancy recall a time that someone slipped a verse under Nancy’s windshield wiper for her to find when she returned from a hectic, overwhelming shopping trip. Jeremiah 30:17. “For I will restore health to you, and your wounds I will heal, declares the Lord.” That moment of kind, encouraging words has been another sign of hope Nancy has clung to in times of uncertainty.

Knowledge, positivity, and a wry sense of humor are among the weapons Nancy and Vaughan use to fight in this ongoing battle of survivorship. And of course, their bond with one another. “We were strong for each other even when we weren’t strong for ourselves,” Nancy said. Vaughan agrees. “We gave and still give each other strength.”